Supermom! How I birthed my baby -- Part 3


Expect the Unexpected
by Lisa Bartelt
“I’ve still got five weeks,” I told a friend less than 48 hours before my daughter, our first child, was born. Needless to say, the timing of her arrival caught us off guard.

My husband and I had been married less than a year when our daughter was born. We were expecting her on April 15. In the middle of the night on March 11, 2008, my water broke. My eyes popped open, and I quickly but quietly followed our birth educator’s instructions to determine whether this was a “call the doctor” incident. My husband slept soundly as I freaked out a little. Finally, I roused him and told him what was going on. We called the doctor and minutes later were headed to the hospital without so much as an overnight bag. We didn’t even have a crib yet for our baby.

I was admitted to the hospital with no other signs of labor, and while there was talk of transferring me to a larger hospital because of the earliness of my labor, the pediatrician felt comfortable taking care of a baby who was going to be more than a month ahead of the due date.
I had no idea how long I was going to be in the hospital before labor started. My husband, who was finishing his college degree at the time, kept me company when he didn’t have class and drove back and forth between our apartment and the hospital to get various items we needed. My mom and grandma drove the three-and-a-half hours from our hometown to the hospital in central Illinois, stopping at Target along the way to buy a pack ‘n’ play style bed for our tiny apartment, along with other baby supplies. 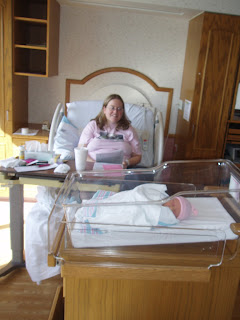 Around 11 p.m., I started having contractions and asked the nurse about what I was feeling. About 3 hours later, on March 12, 2008, our daughter was born. During our birth education classes, I was convinced I wouldn’t need drugs. In the heat of the moment, I asked for a half dose of painkiller, which only made me feel loopy and didn’t really dull the pain. The nurses and doctor were so helpful and honestly, I only remember pushing about four times before we met our Isabelle. (We didn’t know the sex ahead of time and I was sure we were having a boy!) She was a little over 6 pounds and healthy in every way.

I naively thought this birthing babies thing was a breeze! (Maybe it was the drugs talking.)

Less than two years later, I was large with child again, and this time, we were going to be ready. A month before due date, the bags were packed, the bed was set up and we were prepared to bring another life into our house. In the time since our daughter had been born, we’d moved 800 miles across the country to Pennsylvania. New doctors. New hospital. Farther away from family. 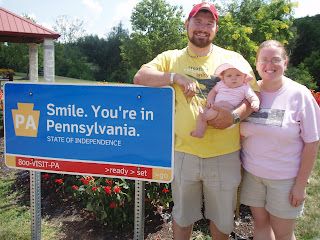 I’d been measuring large and had been scheduled for weekly ultrasounds toward the end. One of the doctors warned me that we might be looking at a C-section. The thought of that scared me more than a little.

The day before my due date, Dec. 1, 2009, I started to feel contractions around noon. I went to Bible study that night with my mother-in-law and had been to the doctor earlier in the day. I was dilated to 3 but with nothing else really happening.

By about 10 that night, I was timing contractions until I finally got to that point where they say you can’t talk or laugh your way through them. We called the doctor and drove to the hospital. By the time they were able to check me, I had moved to a 7.

It all becomes sort of a blur after that. I felt the need to push before I reached 10 and after a few tries, no progress was happening; I wasn’t breathing well and the baby’s heart rate wasn’t recovering well after each attempt.

So, my husband and I found ourselves on the way to an emergency C-section. My husband later told me how worried he was when we were separated as they prepared me for the surgery and gave him the scrubs to wear. I received anesthetic and after that, all I could see was my husband holding my hand and peeking over the sheet, and the friendly face of the anesthesiologist, who had such a great personality I almost forgot I was having major surgery. 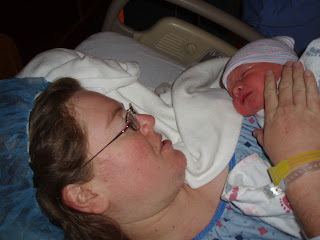 There was such a drastic difference in my two kids’ births that I struggled after Corban was born not to feel like a failure. I’d heard stories of women who had naturally (and drug-free!) birthed babies bigger than that. “What did I do wrong?” I wondered.

But I’ve since learned to be grateful for modern medicine. I don’t know if my life or his were ever in danger that day, but had C-section not been an option, we both might have suffered far worse. He was healthy. And I recovered.
I don’t know if you can ever really know what to expect from pregnancy, childbirth or motherhood. Early on I learned to expect the unexpected.

And my kids continue to teach me that lesson every. single. day.

Lisa Bartelt is a freelance writer, avid blogger, stay-at-home mom of two, voracious reader, and coffee addict who loves a good story. An Illinois native now living in Pennsylvania Dutch country, she blogs about books, kids and Jesus at Living Echoes. This is the third time Lisa guest blogged here on Green Grandma. Make sure you check out 10 Reasons I Hate Being a Mom and The Sabbath Experiment -- A different perspective.
Posted by Green Grandma