I am thrilled to co-host this amazing, perfect-for-gift-giving, giveaway! Here's hoping someone from the Green Grandma community nabs this awesome prize! 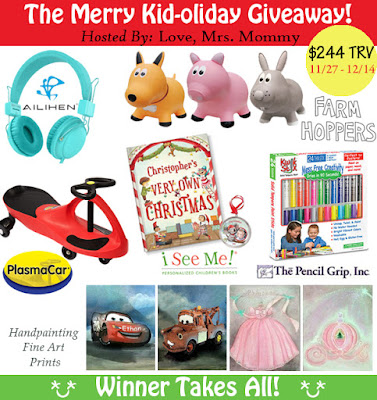 with SharePort and Microphone!

Open To US entrants and must be 18+ to enter

Disclosure: Love, Mrs. Mommy and all participating bloggers are not held responsible for sponsors who do not fulfill their prize obligations. This giveaway is in no way endorsed or sponsored by Facebook or any other social media site. The winner will be randomly drawn by Giveaway Tools and will be notified by email. Winner has 48 hours to reply before a replacement winner will be drawn. If you would like to participate in an event like this please contact LoveMrsMommy (at) gmail (dot) com.
Posted by Green Grandma No comments:


It's Black Friday. Tomorrow is Small Business Saturday. And, of course, 2 days later, we have Cyber Monday. What's a shopper to do? I have a suggestion. And I have a secret. Promise you won't tell my grandson? Okay. I got him this awesome gift for Christmas. Actually, it was sent to me to review, but he's the one that will find it under the tree. Just don't tell him, okay?

Have you heard of BRICK LOOT? If you have a LEGO or Brick fan on your gift list, then you really need to read this review.

BRICK LOOT is a box subscription company for LEGO and Brick fanatics! Subscribers will receive a monthly box filled with unique, custom, and never-before-seen items including custom LEGO kits, LEGO mini-figures and more. BRICK LOOT boxes are filled with 4 - 8 items that were hand-picked by Brick specialists who diligently search for the newest and coolest products for your kids to collect. 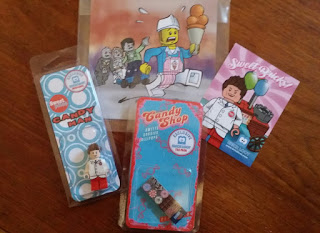 Now, for me, the very best thing about BRICK LOOT is that it was invented by a 9-year-old. Seriously. Nine years old! But that makes sense, doesn't it? Who better to understand what kids love than a kid himself?

I was pleasantly surprised by the selection in my November box. And I think my grandson will love it. What's not to love? Check it out: 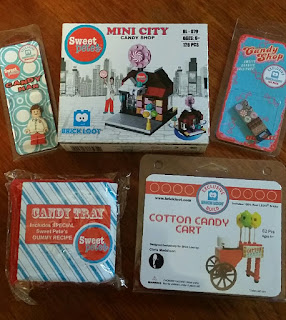 Green Grandma readers are in luck! They get to save 12% by simply using the code "usfamily12" at checkout. Click here to get started! You're guaranteed to be the "cool" mom, dad, grandparent, uncle, aunt, or friend when your LEGO or Brick lover opens their very first box!

Thanksgiving 2017. What I'm thankful for. 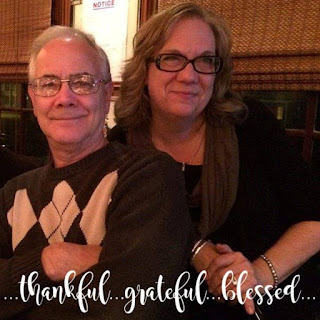 It's been quite the year for me. While 2016 was marked by the deaths of 20 family members or friends, 2017 has been a respite from that kind of intense grief. For that, I'm thankful.

It's been a busy year. Nearly one year ago, I stepped outside my comfort zone and, at 59 years of age, stepped foot into a new office and a new career. I hadn't worked full-time outside of my home since 1982 -- yes, you read that correctly -- yet, here I was starting something new. From voice-over talent, writer, editor, blogger, and speaker to COO/manager of a non-medical in-home care agency in Pittsburgh, I accepted a challenge and lived up to it. For that, I'm thankful.

It's been a scary year, or at least a scary October. On October 3rd, my 70-year-old husband had a massive heart attack and almost died. I was leaving for work when he yelled down and asked me not to leave. Moments later, he told me to call 911. Within minutes, there were six emergency response personnel crowded into our bedroom. As they put him in the ambulance, I was struck with the realization that my husband was dying. My 5'10", 172-pound husband with a cholesterol reading of 121 and triglycerides at 125, was dying.

They didn't fool around once he arrived at the hospital. Rather, they rushed him into the cath lab where they discovered a 99% blockage in his main left anterior artery. Twice, while he was on the table, they had to shock his heart back into rhythm. Two stents later, he was out of the woods.

The thing is, he was this close to death. Had I left for work a few minutes earlier, this post would have a different message and I would bear the title widow once again. But I didn't leave earlier and, today, I'll enjoy Thanksgiving dinner with him by my side. For that, I'm thankful.

This year there have been many more causes for me to lift my heart heavenward and utter the words, "Thank You." But the above three rise above the rest. Every day, I'm met with reasons to sing praises. Sometimes, I have to dig a little deeper to find them, but they're always there.

Today, as you gather around the table to enjoy food, family, and friends, don't skip the most important part. Say thanks for the many blessings in your life. After all, gratitude costs us nothing, but the rewards are deep in riches.

Happy Thanksgiving! Tell me, what are you most grateful for?

Squirmy kiddo? Enter to win a YochiYochi 3-in-1 Safety Harness! A YochiYochi 3-in-1 Safety Harness!

Can be used as a walking harness, portable high chair, and cart safety strap. Oh, oh, oh how I wish I'd had one of these when my youngest was little. What a squirmer, runner, climber she was! I truly needed this! 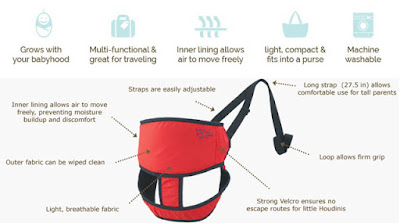 Entry-Form
Disclosure: Love, Mrs. Mommy and all participating bloggers are not held responsible for sponsors who do not fulfill their prize obligations. This giveaway is in no way endorsed or sponsored by Facebook or any other social media site. The winners will be randomly drawn by Giveaway Tools and will be notified by email. Winners have 48 hours to reply before a replacement winner will be drawn. If you would like to participate in an event like this please contact LoveMrsMommy (at) gmail (dot) com.
Posted by Green Grandma No comments: 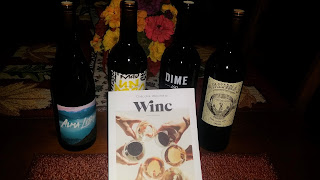 Those who know me, know I love a good glass of red wine. I'm especially a fan of blends. Cabernet/merlot. Malbec/syrah. Petite syrah/cabernet/shiraz. Yeah... the more the merrier. When I heard about Winc, I was thrilled; especially when they agreed to send me four bottles to try out their subscription service. I mean, really... how could I refuse?

When you join Winc, you receive a monthly box containing four bottles of wine delivered right to your door. And one of the great features of Winc is that the shipping is FREE. Yep. You don't pay anything for this wine-to-your-door service. And let's face it -- that's something you busy moms can appreciate once your kiddos are all tucked in for the night. Ahhh... it's time to relax in front of the fire with a glass of Merlot and your honey. Or slip into a hot bath with a chilled Chardonnay and a good book.

Wait... did I take that mom-has-time-to-herself thing a bit too far? Then you definitely deserve a glass of wine now and then!

Anyway, grandmas like me appreciate Winc. As do grandpas. And busy dads. And single folks curled up on the couch with some popcorn and a Netflix marathon.

I really enjoyed each bottle I received, which I selected from the website. My only issue was that most of the wines were from California. Ever since the news about California wines being tainted with glyphosate (even the organic ones, although the levels were significantly lower than conventional wines), whenever possible I've chosen wines from Chile, Australia, Italy, France, etc. I just prefer to not ingest Roundup, you know?

I did choose one California wine, however, and it was quite good. The cool thing is you can choose which four bottles to receive or you can let them surprise you. Surprises are fun, right?

The box I received included a funky little book welcoming me to Winc. It was an A to Z guide to wine with lovely photos and whimsical illustrations. A little light reading for me while I sat down to enjoy my first glass of full-bodied red. What a great combination.


To be honest, there was one thing I did not like about Winc. That was the late night text message I received at 10:36 p.m. to let me know my Winc wine was on its way. Not cool. Now they clearly state on the website that they will send shipping updates between 8 a.m. and 10 p.m. and you can opt out of the text messages, but obviously they hadn't taken my time zone into account when they sent it. I was not a happy camper. I mean, seriously. At least you can opt out and not be disrupted by unnecessary texts.

If you're looking for a great gift for the wine lover on your gift list who seems to have everything or who doesn't need more stuff, consider a Winc subscription or gift card. Bottles start at just $13 and the gift cards start at $60 which allows the recipient the chance to choose the red or white wines that best suit their taste. It's better than another sweater, right?

But it get's better! You can save $22 off your first month of Winc. Just click this link to access your savings!

And, of course, I can't write this post in good conscience without including the warning to drink responsibly and to not drive while doing so (or afterwards, for that matter). But that's one of the great things about Winc -- it comes to you while you're in the safety of your home. Cheers! 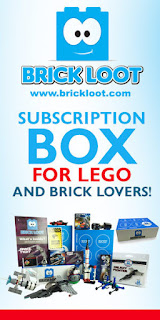 So, this is pretty awesome. I'll be reviewing a Brick Loot subscription box, but before I do, I wanted to let you in on the savings!

Brick Loot is a box subscription company for LEGO and Brick fanatics! Subscribers will receive a monthly box filled with unique, custom, and never-before-seen items including Custom LEGO Kits, LEGO Mini-figures and more!

Brick Loot boxes are filled with 4-8 items that were hand-picked by Brick specialists who scour the world for the newest and coolest products for you to collect.

My readers get to save! Click here to save 12% off Brick Loot using code "usfamily12". 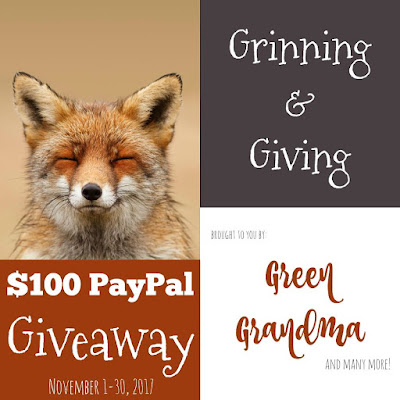 It's November! That means gift-giving season is right around the corner!

I remember how I used to buy gifts throughout the year and stash them in my gift cupboard. That meant there wasn't a strain on the budget in December (or credit card debt in the new year).

However, life has been extraordinarily busy this year and at this point I have next to nothing. Zilch. Nada. How about you? If you're disciplined type, you probably not only have your gifts bought, but wrapped as well. Unimaginable for a procrastinator like me. Wrapping is a chore left for as close to Christmas as I can manage.

If you're done, then this giveaway is perfect for a little pampering for you. But if you're like me, then this $100 PayPal giveaway will go to good use toward the upcoming holiday expenses.

The giveaway runs for the entire month of November and the winner will be drawn on 12/1/17. Open to everyone ages 18+ WW, but the winner must have a PayPal account to accept the prize.