UNLESS -- the theology of Dr. Seuss 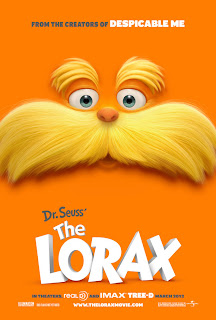 Regret.
Greed.
Consumption.
Redemption.
Conservation.
Infatuation.
Short-sightedness.
Determination.
Motivation.
Add some whimsy, some humor, bright colors, and the brilliant intuitiveness of Seuss and you'll get a quick summation of my impressions from the movie The Lorax. While some are bemoaning the screenplay's straying from the original brilliance of Dr. Seuss, I found the film to be both entertaining and compelling.
Bill and I took Laura to see The Lorax over the weekend. While the message of the movie was a bit over her 3-year-old head, I was deeply moved by many aspects of the movie. And I couldn't help thinking this would not be a movie E.I. DuPont, William Hearst or John Francis Queeny (founder of Monsanto) would be eager to see. Perhaps they'd even squirm a bit in their seats.
And, of course, there are the political implications of The Lorax, as those on the far right will likely threaten boycott of the film for its "blatant environmental indoctrination of our children." Give me a break! Those on the far left will applaud the film's "true depiction of where Republicans are taking our country." This kind of foolishness makes my blood boil. Guess what, folks? We can twist nearly anything to make the "other side" look bad.
For me, the movie was not political. It was an exaggeration of where we're going in this world of ours. The world of over-consumption, greed, laziness, self-centeredness, greed, wastefulness, apathy, greed, short-sightedness, stupidity, greed ...
Everyone can find a character to identify with in this movie, whether it is with 12-year-old, Ted, who is at first motivated by infatuation; Audrey, the object of his affections and a teenager with a heart for the beauty of what was in the natural world; Once-ler, who let his ambition, and eventual greed, overshadow common sense and is later doomed to a life of regret; Grandma, who remembers; or maybe even the Lorax himself, who offers advice, but does not impose his wisdom on anyone, even though he is the heart of the movie who speaks for the trees. Seuss had a universality to his work that reached across oceans, across religions, across social classes, across generations and, yes, across political parties. This is not a Democrat vs. Republican movie ... unless you make it one.
It is a movie that reveals the dangers of raping the earth for corporate gain. It shows how "progress" isn't always a good thing. Some of it is far-fetched fantasy. And some of it is way too close for comfort.
As the film came to an end, I hoped they would run the credits without raising the house lights. I didn't want anyone to see my tear-drenched cheeks and reddened eyes. Yes, I cried during The Lorax. Bawled my eyes out.
The redemption scene at the end really touched me. Grace and forgiveness tends to do that. But it was beyond that.
The message, thoughtfully delivered by Dr. Seuss when he wrote the book in 1971, was the heart of the film. And it spoke volumes to my heart. You see, sometimes I get discouraged as Green Grandma. I spend countless hours each week researching, writing, advising, and trying to turn the tide toward a healthier world for you and your families, as well as for me, and my family. But it's hard and sometimes I just want to give up. Every time I hear of yet one more thing that's not good for me or for the earth, depression threatens to get a hold of me. I start to think, What's the use? Does anyone even care? And then I debate shutting down the GG blog completely.
But then something happens. I get an encouraging email. Someone sends me a note. I take my granddaughter to a movie.
In this case, it was a movie that packed a much-needed punch that started with the word UNLESS.
UNLESS someone like you cares a whole, awful lot,
nothing's going to get better. It's not.
I care. A whole, awful lot.
If I've motivated you in any way at all, I guess GG is doing her part.
Hana

Use promotional codes to save money on Dr. Seuss and other children's books.
Posted by Green Grandma