The Sentinel -- A story about my dog

It's a busy day for me. Tonight, I start teaching a new workshop called, Inspiring Others the Chicken Soup Way. After seeing eight of my stories in print with the best-selling series, CHICKEN SOUP FOR THE SOUL, I will be teaching others the formula that dramatically increases their chances of being published in the anthologies.

That said, I thought it would be a good day to share my most recent publishing success with them. It's a short little story about the pets we had several years ago. I hope you enjoy it. 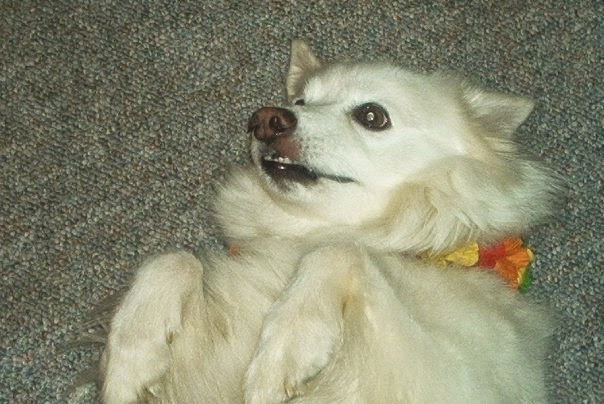 "Here kitty, kitty," our green parakeet, Maggie, said, leaning down from her perch. "Meow." Her endless taunting frustrated our menagerie of cats. I frequently caught them eyeing her, their whiskers twitching and their tongues running hungrily across their lips.

Then it happened. I arrived home from work, surprised that my overzealous American Eskimo dog did not greet me.

"Jake," I called, but the tapping of claws across the hardwood floor didn't happen. Neither did the exuberant barked greeting I was accustomed to. Something was wrong.

I walked into the kitchen, then back out to the living room, calling for my dog again. Stepping through the door of the family room, I stopped. Maggie's cage was on the floor, seeds scattered and water spilled. Since her wings were clipped, she wasn't able to fly to safety, so she was on the floor as well. Hopping back and forth and chirping apprehensively, Maggie was being watched by five attentive cats, their tails swishing across the carpet.

There was only one thing standing between a parakeet feast and their growling tummies -- Jake, the ever vigilant guard of all members of the Caye household, whether human, furry, or feathered. Jake sat facing the cats, baring a bit of teeth if one of them so much as lifted a paw, while Maggie paced behind him.

After the cats were shooed out of the room, I set the cage upright onto its stand. Maggie eagerly hopped from my finger back into her sanctuary, chattering gratefully for a moment before resuming her usual, "Here kitty, kitty. Meow. Meow."

Jake looked up at me and I patted him on the head. Then we went into the kitchen for the treat jar. If ever he earned a reward, it was the day he saved the parakeet. Good dog.

~ Hana Haatainen Caye
as seen in CHICKEN SOUP FOR THE SOUL: THE DOG DID WHAT?
©2104

Email ThisBlogThis!Share to TwitterShare to FacebookShare to Pinterest
Labels: Chicken Soup for the Soul, dog story, story about a parakeet, The Sentinel