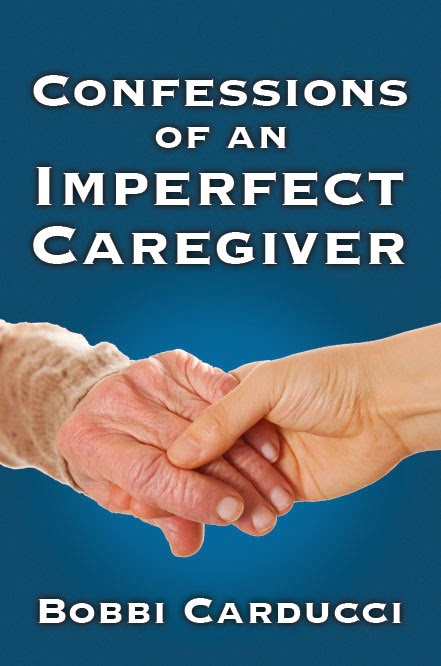 It's Friday. That means we're talking alternatives in another edition of Instead of This, Use This. Today, I'm happy to welcome guest blogger, and friend, Bobbi Carducci, author of Confessions of an Imperfect Caregiver. Today, she's offering some insight into switching things up a bit, when needed. In this case, she shows off her creativity by figuring out how to please the palate of someone suffering from Dysphagia. Instead of tasteless pureed food, she served up a feast.

If I Don’t Get a Sandwich Soon …
by Bobbi Carducci

“Give me some real food! If I don’t get a sandwich soon I’m going to be a goner,” my father-in-law, Rodger, demanded. Dysphagia had taken away his ability to swallow properly. He was frustrated and angry and taking it out on me. “I’m going to tell the doctor. You wait and see. I’m going to tell him you’re starving me to death.”

I assured him that talking to the doctor was the right thing to do if he felt he was not being treated right. By the next office visit he’d forgotten about the threat.

Despite feeling hurt by the accusation my heart went out to him. I had to find a way to create meals that would bring him some measure of enjoyment and maybe, in the process, ease his anger toward me.

For weeks I’d been preparing pureed food and thickened liquids. Neither one of which look very appetizing nor do they satisfy the urge to chew. I showed him that the mushy stuff he insisted wasn’t food was the same things he used to eat. I helped him mash the potatoes, prepare the vegetables, and put them in the food processor.

“This is real food,” he finally admitted. “But it’s not as good. I need the real, real food.”

I wanted to serve him roast chicken, a baked potato and fresh green beans with a slice of apple pie with ice cream for dessert. He should have been able to eat anything he wanted. But the danger was too great.

I got creative in what I prepared. I pureed cupcakes with whipped cream and cherry juice on top to satisfy his sweet tooth. I made chicken stew with all the standard ingredients and pureed it for him. The peas turned the stew green. It looked a bit odd but it tasted good. I thickened nutritional drinks with bananas and peanut butter and a bit of baby cereal to make milkshakes that didn’t melt in his mouth. He loved them. I cooked with flavor and nutrition in mind.

Still the words, “If I don’t get a sandwich soon I’m going be a goner,” stuck with me. I lay awake at night trying to figure out how to make a sandwich that would be easy to swallow.  Finally an idea came to me. I would puree a tuna sandwich.


It wasn’t perfect but it helped him feel like he was finally getting a sandwich and that meant a lot to both of us.
Every day I tried to make him some version of the meal the rest of us were having. On Thanksgiving I put homemade gravy on pureed dressing and mashed potatoes alongside organic turkey baby food. At the end of the meal he said, “This is just like my wife used to make.” I knew it wasn’t true but as long as he enjoyed it there was reason to be truly thankful.

There are many pureed foods available for purchase; however, like most processed foods they can be full of additives and preservatives. I avoided them whenever possible. His body was coping with so much I wanted his diet to be as healthy as possible.

An estimated 15 million people in the United States have the current diagnosis of Dysphagia. Patients with Dysphagia are at high risk for aspiration pneumonia which weakens them and can lead to death. Nearly 60,000 people die each year from complications associated with swallowing disorders. Click here for more information on Dysphagia.

Are you a caregiver? Share a bit of your story in the comments below.

Bobbi Carducci is the author of Confessions of an Imperfect Caregiver and a caregiver blogger at The Imperfect Caregiver, AgingCare.com and The Caregiver Space.  For more information about Bobbi and her writing, she invites you to visit her website www.bobbicarducci.com

Email ThisBlogThis!Share to TwitterShare to FacebookShare to Pinterest
Labels: caregiving, Confessions of an Imperfect Caregiver, Dysphagia, guest blogger Bobbi Carducci, Instead Of This Use This, preparing food for someone with dysphagia