A mosque at Ground Zero 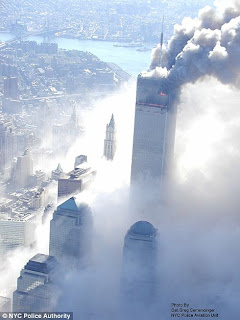 I'm a bit perturbed. Why is it that if we, as Americans, object to the building of a mosque a mere 600 feet from Ground Zero, words and titles are thrown about in reference to us, like 'racist,' 'intolerant,' 'right-wing radical,' etc., etc., etc.???

I, personally, am tired of being told that Muslims are peace-loving people and that Al Qaeda is an extremist group that holds different views than the majority of Muslims. Really?

Well then, let me ask you this: Why is it that Christianity is not tolerated in most of the Muslim countries and that violating the law by proclaiming Christ results in torture, imprisionment and/or DEATH? Are all those countries ruled by Al Qaeda? Where is the tolerance here?

As Americans, we're having the word 'tolerance' rammed down our throats on a daily basis. So much so, that it is no longer acceptable to hold an opinion outside of one that accepts all lifestyles and all religions...except, of course, those that relate to traditional Christian viewpoints. Why does the freedom of religion, which is a benchmark of our country, apply to nearly everyone except Christians?

Do I think Muslims should be allowed to worship in the U.S.? Of course. Should mosques be permitted? Certainly. That is not the issue.

If these "peace-loving" Muslims want to build a mosque in New York City, then they should have the sensitivity to build it somewhere other than a place where it will overshadow the spot where innocent lives (Christian, Jewish, Muslim, Hindu, atheist, secular materialist, etc.) were lost in the name of Allah. If you're buying into the propaganda that this has nothing to do with the terrorist attacks on our country, then ask yourself why the inauguration date for the mosque is 9/11/11? Really, folks, there isn't much to think about here. Let's commemorate the tenth anniversary of 9/11 by opening a brand new mosque overlooking the site of the worst terrorist attack in our country's history. Brilliant.

I realize I started this post with an error. I'm not perturbed...I'm fighting mad!! And it has nothing, whatsoever, to do with being intolerant or any of the other words you want to use against me. It has to do with compassion for those who lost their loved ones on that dark, dark Tuesday nearly nine years ago.

What does this have to do with my blog. Everything. Because if those of us who have belief systems contrary to what is widely accepted don't start standing up for what we believe, there's no point in creating a better environment for our children. If I was a gay parent, I'd be applauded for standing up for my life style choice and value system. If I was on a journey that led me to universalism, I'd have a movie made about me starring an outstanding Hollywood actress. But if I was a Christian making a stand for my faith, I'd be silenced in some countries, martyred in others, and at the very least, humiliated for my narrow-mindedness. Does anyone else see the imbalance here?

Well, guess what? I will not be silenced. My faith in the Lord Jesus Christ is the cornerstone of all that I do. It is the reason I care so much about the environment and about the health and well-being of the precious little ones whose lives are ultimately better when they're free of toxins and chemicals.

It is my hope and prayer that if you do not embrace the same faith as I do, you will continue to be a part of the Green Grandma community. You see, I am tolerant of others' beliefs and values. What I'm not tolerant of is intolerance toward my brothers and sisters in Christ.

If you doubt any of what I'm saying, please take the time to view some YouTube videos on the subject of Christian persecution worldwide. Even if you are not a Christian, you will find these videos heart-wrenching as young girls are raped, young boys are burned alive, and all sorts of unimaginable horrors are inflicted on our fellow human beings simply because of what they believe. It's time to stop the intolerance of Christianity.