Most of us try to do what's best for our kids. Whether it's the food we feed them, the diapers we put on them, or the products we choose for them, it's all done with their health and well-being in mind. But there's one thing we can do for our kids that helps ensure their emotional and mental health -- love their other parent.

Before those of you who are single parents start getting defensive, please don't. I know that marriages sometimes don't work out. Some of you may have been married. I will say, that while you may not love your children's other parent, I truly hope you can at least like them. Nothing is as damaging to children as parents who tear each other down and make their children feel torn between them. Divided loyalties are tough on kids.

Anyway, today's post is not about divorce. It's about a long-time loving marriage between two special friends of mine. The story appeared in Chicken Soup for the Grieving Soul in 2003 and a revised version was featured in yesterday's Pittsburgh's Post Gazette. I thought you might enjoy it.

Biography: Susan made him tilt and Frank, happily, was never the same 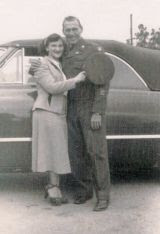 Frank was playing pinball at Liberty Cafe on the North Side when the short, red-haired waitress bumped into the machine. A red light flashed "tilt" and the game was over.

Reaching into her apron pocket, Susan pulled out a nickel and flicked it to him before waiting on her next customer.

"Sure you are!" he laughed. "She's been here a long time, and I've never known her to even go out on a date. Good luck!"

An accident along Ohio River Boulevard in the late 1930s had changed Susan's life forever.

She woke up from a coma to discover her young husband was not only gone, but already buried as well. As a young, widowed mother, she worked hard to support her daughter and herself; the last thing she was thinking of was complicating her life with a new man.

But Frank's lucky charm worked. Susan stepped down off the bus to meet him on their first date, looking absolutely stunning.

"She knocked my socks off," Frank told me. "I wasn't letting this one get away!"

Soon Frank had not only won Susan's heart, but her daughter's heart as well.

Wedded bliss didn't last for long. After already serving in World War II, Frank re-enlisted and headed overseas during the Korean conflict, leaving Susan in the single-mother role once again. A second daughter kept her busy, with both girls missing their daddy. Frank made it home safely, and as tends to happen, the years passed by quickly.

Frank loved to tell "the nickel story" to anyone who would listen. His eyes sparkled as he spoke of his love for Susan. This was a man who truly loved his wife.

Their 50th wedding anniversary in January 1997 was a special day. Frank contacted me to do a floral arrangement for the church and a corsage for his bride. They renewed their vows on a Sunday morning following the worship service at Emmanuel Christian Church in Brighton Heights.

The band surprised them as they walked down the aisle by singing "their" song, "The Sunny Side of the Street." Their walk turned into a dance as Frank twirled Susan down the aisle. What a celebration! It was always a joy to be in their presence.

All the seats at O'Brien Funeral Home on California Avenue were taken as we gathered in the fall of 1997 to honor the memory of this dear friend. We were all inspired by him in our own ways.

My eyes filled with tears as Tim Hartman, a special friend to the family, sang one of Frank's favorite hymns. Terry Booher, Frank's minister, eulogized Frank with such love and respect. We laughed, and our hearts were warmed as he shared memories of this special man.

And then he told the nickel story.

Frank had called him a week or so before he died and asked to see him. While they visited, Frank retrieved a nickel and handed it to Terry. Over five decades had passed, yet he still had his lucky charm.

"Frank told me to keep this for him," the minister said as he reached into his pocket and walked over to Susan. "He wanted me to give it to you today and to tell you to hold onto it. He'll be waiting for you at the pinball machine."
Posted by Green Grandma

Email ThisBlogThis!Share to TwitterShare to FacebookShare to Pinterest
Labels: Frank Laaks, Green Grandma, Love story, Pittsburgh Post Gazette, Susan Laaks, the best thing you can do for your kids, The Nickel Story