A little bit of motivation 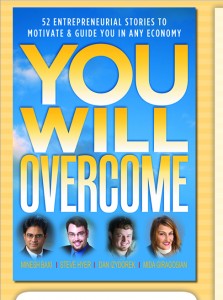 A few years ago, I was hired to edit a book called You Will Overcome by Minesh Baxi. It is a book of stories of people who overcame obstacles in their life and followed their dreams. My own story is on page 176, just a few short pages from Oprah Winfrey's story. It was written during my humble beginnings with this blog, so my life as Green Grandma is not mentioned. But it is a story intended to motivate and inspire and I thought you might enjoy reading it.


The Up Side of Upside Down
by Hana Haatainen Caye

“Jim’s been hurt and is being taken to West Penn Hospital,” a familiar voice said.

“Why? What happened?” I asked, sitting up in bed and turning on the light.

“There was a fire and he got burned.”

“Where?” By now my heart was waking up and starting to race.

Doug, his co-worker and best friend, tried to avoid my question.

“WHERE was he burned?” I demanded.

“Well…it’s nothing more than bad sunburn,” he lied. “Life Flight’s taking off now. I’ll see you at the hospital.”

“Wait,” I panicked. “Life Flight? They’re flying him to West Penn. Oh god, Doug, how bad is this? You have to tell me. Where was he burned?”

He hesitated before answering. “Pretty much all over his body.”

Before I left the house after making arrangements for my five-year-old and seven-year-old daughters, the phone rang again. This time it was a nurse calling from the Burn Unit.

“Your husband wants to talk to you,” she said softly.

“Then he can’t be hurt that bad.” Hope started rising in my chest.

“I’ll try to hang on…for you and the girls.”

Those were his last words to me. My 34-year-old husband suffered third degree burns over 98% of his body and lived in that condition for 23 long, but way too short, hours.

As I left the hospital, I felt numb. Nothing would ever be the same for me again. I went from being a stay-at-home mom, who loved her husband and the life they’d made together, to a 32-year-old widow. What was I going to do?

The years passed. I married another wonderful man who embraced my girls as if they were his own. We bought a beautiful house and lived comfortably on his income coupled with the Social Security I received for my daughters.

Even though graduation was looming for both of them, I kept ignoring the ramifications of losing the S.S.I. once they were done with school. It always seemed ‘so far away.’

When graduation day one and two finally arrived and I no longer was bringing in an income, I knew I had to do something. Working part-time as a floral designer, I realized I’d have to find a more substantial way of making a living. Scanning the Internet, I discovered the world of mystery shopping, merchandising and auditing. As an independent contractor, I was able to set my own hours and thoroughly enjoyed the flexibility of my new ‘career.’

In January 2005, after a rather dismal year financially, I decided to pursue a full-time writing and voice-over business. Gas prices were rising, the wear and tear on my car was starting to take its toll and the mystery shopping industry was becoming saturated with shoppers. One cold winter night, I decided to join a couple of websites featuring freelance opportunities. I named my company Speechless, developed a tag line – I put words in your mouth! – and started bidding on projects. The next morning I woke to discover I’d been awarded four of them; one being a voice-over project. The problem was I didn’t even own a microphone!

“I need to buy the best microphone you have,” I told the salesperson at a local electronics store. He led me down the aisle and handed me a $34.99 mic that plugged directly into my laptop. It worked well enough for me to complete that project and many more in the next six months or so. It wasn’t until a client asked me what kind of mic I was using that I realized it was time to upgrade. Eight hundred dollars later, I felt like a pro.

Immersed in a business I love, I am able to use my talents, and my college education, in a way I’ve never been able to do before. My voice-over work ranges from simple voicemail and on hold messages to audio books and eLearning modules. Sometimes I need to sound like a business professional; other times like a little girl. I’ve voiced animations, book trailers, television and radio commercials, and nearly everything in between…all without ever having to leave my home.

The writing part of my business has led to my leading a local writer’s group and teaching workshops at writer’s conferences and other venues. One of my workshops is titled, Inspiring Others: How to turn your true stories into cash and as a result, I’ve been thrilled to see some participants in my classes have their work accepted for publication.

In 2007, Bill Hyman contracted me to work as an editor/ghostwriter for Chicken Soup for the Network Marketer’s Soul. I was privileged to interview or rework stories from some fascinating and resilient people.

Every day for me is different, which can be challenging at times. But having created the opportunity to pursue work I love makes everything worthwhile.

Here are the main characteristics I think you need in order to turn things around in your life:

• Resiliency – the ability to bounce back when life doesn’t go as planned.
• Tenacity – the drive to keep going and not give up.
• Creativity – the power to re-create yourself and your career.
• Flexibility – the willingness to alter your plan when it is not working.
• Curiosity – the need to discover and learn new things.

It’s been 20 years since the phone call that turned my life upside down. As painful as it was, I’ve come to realize that upside down isn’t always a bad thing…not when we’re given the tools to build around whatever it is that life has handed us.