Lead poisoning -- could your kids be at risk?

As it says on the Lead Safe America Foundation's website: Lead poisoning does not discriminate.

According to Medicine.net, lead poisoning is an acute or chronic poisoning caused by the absorption of lead or any of its salts into the body. Lead poisoning is an environmental hazard that is capable of causing mental retardation, behavioral disturbance, and brain damage.

Since lead, even at minute amounts, is a potent neuro-toxin, experts agree there is no "safe" level in a child's blood. If a child is exposed, there is a chance for permanent damage. Levels as low as a blood lead level of 2.0 have adversely affected the health of children. Dangers exist to preborn children as well, when their mothers have been exposed during pregnancy.

The younger a child is when he or she is poisoned, the risks of more extensive damage increases.

Due to some chemical similarities, when lead is present it is absorbed by the body and brain in the place of calcium. When a young child is poisoned and the neurons in their brain are at a stage of rapid growth and development, the damage to the brain can be especially significant, resulting in brain damage that leads to lifelong challenges -- including behavioral disorders, learning disorders, ADD/ADHD, Autism Spectrum symptoms and more.  ~ www.leadsafeamerica.org

The Mayo Clinic lists the following as symptoms of lead poisoning in children:


In infants exposed before birth, the signs of poisoning include slowed growth and learning difficulties. And in adults, the signs and symptoms include:
This is scary stuff, folks, and like I mentioned earlier in this post, lead poisoning does not discriminate and even though lead is present in many of the places where children spend their time, routine testing for lead exposure is simply non-existent. Unfortunately, that means that during school years, symptoms are often treated pharmaceutically -- following misdiagnosis of a disorder rather than of lead poisoning that may have occurred many years earlier.

Lead Safe America Foundation recommends having children tested before they start to crawl, and then again 6 to 8 months later. Dependent on the findings, regular follow-up testing during annual well-visit check ups is advised. The hope is, by testing early, that the lead will be detected before a child is actually poisoned by it.

When a child tests positive for lead, it is essential that the parent finds the source and immediately removes the child from that environment. Often, the source comes from dust created from opening and closing the original windows and doors in a pre-1980s building (lead-based paint was banned for residential use in 1978 here in the U.S.). 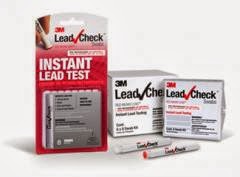 3M offers Lead Check™ Swabs, available in retail stores and online. I recommend you purchase some and start testing your home and the other places you and children spend time.

I'm going to be testing my home. I hope you'll be testing yours as well.