Today's post is the 10th in the birthing series. It was written by Valerie, a wife and stay-at-home mom. Originally from Long Island, NY, she now lives in North Dakota with her husband, three daughters, and two very active puppies.

We made the decision to start trying for baby #1 in October 2007. We were married for about a year and a half and living in the UK. In December, I went to the doctor for a check-up and any advice to get us started. We found out we were pregnant in February and in April, we moved back to the US. We traveled via the Queen Mary II; never go on a cruise while you already have morning sickness! For the whole week, I lived on ginger candy. 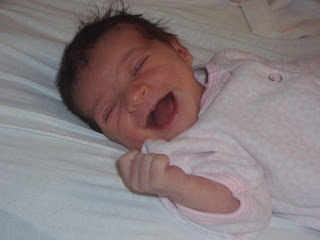 The pregnancy went about as well and uneventful as a pregnancy can go. We didn’t want to find out the gender, but we were living 1800 miles from our families and they persuaded us to find out so they could throw a shower and send us gifts before the birth. We had her name picked out early as well. Emma, after his grandma, and Grace, after mine. We just hadn’t agreed on the spelling.

She was due on November 3rd. On Saturday November 1st, we went to dinner with some friends for one last night out as a couple. Halfway through dessert, about 8 p.m., I had my first real contraction. Another mother at the table recognized it right away. My face turned pale and she told me that I was officially in labor. After dinner, we went straight home to make sure all the last minute things were taken care of and to give our neighbors an extra house key so they could walk the dog. It was around 2 a.m. when I thought my water broke and we headed to the hospital. Unfortunately, it didn’t. I was just one of those lucky women who lost control of my bladder with every contraction.

I had read What to Expect When You’re Expecting, so I thought I knew everything. I had my birth plan, my music, my pillow; I had it all planned out. I was going to have a drug-free labor and a natural birth; boy was I wrong and completely uneducated. Around 8 a.m., 12 hours into labor, I just wanted to go to sleep. I asked for something to help ease the pain enough for me to sleep and I was given a shot of morphine. It was a complete waste; it barely numbed the contractions and wore off in about two hours. Nurses were in and out what felt like every five minutes and I didn’t get any sleep. By 8 p.m., 24 hours into labor and 36 hours of being awake I gave up, I asked for the epidural. As amazing as it was to not feel any pain, I still couldn’t sleep. In my head, I understood what was about to happen. But, I wasn't mentally prepared for the reality of not being able to move.They also hooked up a Pitocin drip without even asking or telling me they were doing it. I found out later it was standard procedure with the epidural.

Around 10 p.m., my water broke. It was 26 hours into labor and I was only dilated to three. They hooked the monitor to her head because they were having trouble monitoring her. I was told around 6 a.m. that her heart rate was dropping and they were scheduling the C-section for 9 a.m. I cried both tears of anger and joy. I couldn’t understand why my body didn’t want to work, but I was so grateful this traumatic event had an end in sight. By the way, I was still dilated to three.

It was now Monday, November 3rd. I cried all the way from labor and delivery to the operating room. I don’t remember much in there. Everything seemed to move quickly and robotically. I know she was delivered within minutes, but I only got to see her for seconds. They brought her back to me over an hour later when I returned to my room. The poor thing was starving and latched on immediately.

Those first few days were terrible for me. The lack of sleep made the surgery recovery that much worse. My amazing hubby had to do everything, including changing every diaper for the first few days. I left the hospital Thursday and I’m pretty sure that night was the first night I was able to get some real sleep in nearly a week.

It turned out the cord was wrapped around her arm and it was preventing her from dropping any further. Since this was the case, I was told I wouldn’t need a C-section for future pregnancies. However, after a month or so, the scar never healed right. It was constantly itchy, keloid, and still painful in spots. I found out my insurance wouldn’t cover a tummy tuck or whatever it was I needed to fix the scar. So, I decided that my next baby should be a C-section so I could fix that scar. After about six months, I was still unable to wear my jeans and the itchiness was unbearable. My first two are 18 months apart. And that was mostly because the doctor recommended waiting nine months for my body to heal from the first. 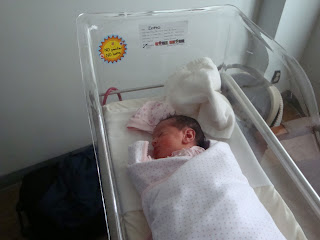 Baby girl #2 was a scheduled C-section that also did not go quite as planned. On the way to dropping off our daughter with the sitter, we witnessed a car accident. Talk about scary. Hubby went to help while I called 911. We were there for about a half hour, telling the police what we saw, and ended up being about 15 minutes late to the hospital. I was wheeled down to the OR at 11:30 and scheduled for noon. About 10 minutes later, the nurse came to me and said my doctor was called to an emergency C-section and it would push me back about an hour or so. Soon after, I was told there was a second emergency and I was pushed back again.

Meanwhile I was already hooked up to the IVs and this was causing me to use the bathroom frequently. Baby #2 wasn’t born until 5 p.m. I was also starving since they told me not to eat after midnight. I made it back to my room around 7:30 p.m. and hubby left to pick up our daughter from the sitter. The recovery seemed a million times easier the second time around. I was well rested and mentally prepared. At the time, we thought our family was complete. 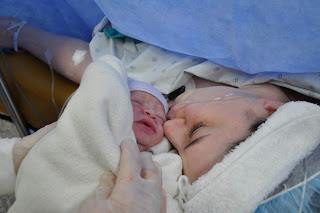 It was a year or so later when I decided I wanted to try one last time for a boy. This time I was told I needed a C-section because they wouldn’t do a VBAC after two surgeries. Baby #3 turned out to be a third girl. I went into the hospital at 6 a.m. and she was born just after 9 a.m. Her sisters were there with my mom waiting for us when we got back to our room. The best part was seeing their faces as they met their baby sister for the first time.

So that’s my story. I have three beautiful little girls under the age of five that keep me unbelievably busy. I didn’t get the natural births I desired. But, at the end of the day, they entered the world happy and healthy and really that’s all that matters.


Click the links below to read some amazing birth stories from our group of Supermoms!