My most important review to date

It's Review it Wednesday and if you only read one review I've written so far or in the future, this is the review I want you to read.

Last evening, my husband and I attended a screening of Unacceptable Levels, a documentary by Ed Brown. Hosted by Women for a Healthy Environment and Learning Disabilities Association of America, this was the third screening of the film, and I was honored to be part of an unfortunately small group of concerned... what? Americans. Parents. Grandparents. Republicans. Democrats. Independents. People of faith. People without faith. Black. White. Indian. This was a group of people who may have had nothing in common, yet we had everything in common. We care about the current situation of our toxic planet, and we want to do something about it.

Ed Brown does, too. That is why he created this film. Born with a cataract in his right eye, deeming him legally blind, Ed also suffers from asthma. His beautiful wife, Lauren, developed Crohn's disease as a teenager, and as an adult, lost two babies to miscarriage. The Browns have two seemingly-healthy-at-this-point adorable blond-haired children, who are featured often in the film. Perhaps that seems a bit indulgent of the filmmaker, to feature his kiddos throughout this documentary. But their presence continually drives home the point... There are dangers all around us, and we have to do whatever we can to protect the children and future generations. Period.

This is just another piece of propaganda, you may be thinking. Brown's just an Al Gore wannabe.

Let me take exception to that thought process right off the bat. Those of us who are preaching the unsafe chemicals, toxins all around us, message, have nothing to gain. On the other hand, huge corporations being called out for their irresponsible use of carcinogens and endocrine-disrupting toxins have lots to lose. And money talks. We can all agree on that.

But these chemicals wouldn't be in our products if they weren't safe, right?

Wrong. "Safe" is a politically defined term that guarantees absolutely nothing. And companies are quite adept at "green-washing," offering products labeled with terms like "green," "organic," "natural," "healthy," etc.

From Monsanto to DuPont to L'Oreal, the issue of non-disclosure is monumentally in their favor. While cosmetics and personal care products must include ingredients, there is one word, in particular, that is especially troubling: "fragrance." What exactly does that mean? Fragrance is a very small word covering a HUGE list of potential toxins.

But the government wouldn't allow that, would they?

As I said, money talks.

These are just some of the things covered in this enlightening documentary. The film is sobering, with some punched-in-the-gut moments woven into some lighthearted moments. I found myself crying at times and furious at times. And then there would be those adorable Brown children with their curly hair and wide eyes and I was smiling once again.

I enjoyed seeing the clips of old commercials and film footage adeptly woven into the film, yet I often cringed at the lies we were sold. But it wasn't just Ed Brown's opinions and quest for a solution that drove the documentary. It was also the myriad of experts who offered their wisdom throughout. Experts like Ralph Nader, Ken Cook (EWG), Stacy Malkan (Campaign for Safe Cosmetics), and many more.

Randy Hayes, Founder of Rainforest Action Network and Executive Director of Foundation Earth says this about the film: "This movie makes it impossible to hide behind the numbers. It not only changes the way that you look at the world, but the way that we look at ourselves."

This is a documentary about what goes in our bodies and what we can do about it. Is it about social activism? It can be. Is it about the need for change in government regulations? Of course. Is it a plea for corporations to take responsibility and stop poisoning us? Yes. But mostly, it is a call to action for each of us to educate ourselves and take action to protect ourselves as much as possible.

Brown and his guest experts throw a lot of numbers and statistics around. Sobering numbers.

But it won't be seen unless the money for distribution is raised. This is where you come in.

The Indiegogo Campaign is underway. And here's an added perk: 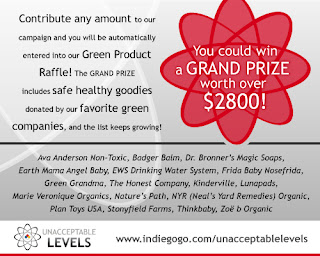 So, everyone who donates $1 or more to the Indiegogo Campaign between now and November 6th will be entered into a drawing to win an amazing safe and healthy prize package valued at over $2800!! The contest is open to residents of the U.S. only and the winner will be announced on November 7th. Click here for a list of sponsors and prizes.

Use your voice! Remember the Lorax:


Unless someone like you cares a whole awful lot,
nothing is going to get better. It's not."