To quote a friend, "Cancer Sucks!" 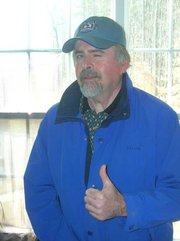 My friend, Michael DeCoulaz, lost his battle to cancer last night. I found out when his daughter posted it on his Facebook wall. The news took my breath away and left me with that sick, sick feeling in the pit of my stomach. I'm not dealing well with the news.

Like my friend, Sharon Donovan, who died last month, I expected Mike to pull through this ... to beat it. His wit, his attitude and his faith, just like Sharon's, made it impossible to believe the doctor's prognosis. Sure, it was terminal. But surely, Mike would beat it.

His death came as a shock. There seemed to be no "going downhill fast" kind of warning. He started a new round of chemo and then he died. He died. I'm still trying to wrap my brain around that.

Mike was the first guy I started seeing in college, which totally freaked out my roommates. We didn't have dorms, but lived in townhouses with 5 of us in each one. When Deke (which is what everyone called him back them) would come knocking on the door late at night, they'd all lock themselves in their bedrooms. You see, Deke got kicked out of school the year before. I've decided not to go into it publicly here, but it did concern my roommates. I wasn't worried. I believed in second chances. And I liked Deke. Really. Despite his reputation, he was courteous with me and treated me with respect.

I don't recall what happened, but we didn't stay together for more than a couple of months. Parting was mutual and there were no hard feelings.

Many years later, I was working in my office late one night, and I received a phone call. It was Deke. He was living in South Korea and decided to look me up. Everyone I knew from college had lost track of Deke. We all assumed he was either in jail ... or dead. He was neither, but that was almost not the case.

He told me this story:

After college, things went steadily downhill. I kept trying to make sense of my life, but it just wasn't working for me. Finally, I decided it was time to end it. I was sitting at the kitchen table thinking about how I was going to kill myself when I saw an ad in the newspaper. They were looking for English teachers in South Korea.

I picked up the phone, made a plane reservation, and headed to South Korea, leaving my former life behind. I got a job, met the love of my life and got married. I even have a daughter!

The reason I called was because I wanted to let you know that everything you told me about while we were in college suddenly made sense to me after I got to South Korea. You were right!

You see, Deke and I spent quite a bit of time while we were together, talking about my faith. He didn't buy into it at all, and mocked me for it (which is probably why we didn't stay together for very long!). But in the midst of his search for meaning in his life, he found, not religion, but a relationship with the Creator of the Universe. The Father, Son and Holy Spirit turned Deke's life around. He was no longer riddled with angst. He was at peace. That peace led him to a purpose.

Michael's love for the people of South Korea was evident in everything about him. He brought his wife and daughter to the states, where they settled happily in Charlotte, North Carolina.

When he was diagnosed with cancer late in September, he approached it as he did everything else in his new life in Christ -- with optimism, enthusiasm and humor. He continued to make us laugh.

For me, I feel drained. With Sharon's death just a month and a half ago, and now Deke's death, I'm feeling really, really sad. So, I'm going to take a little break from the blog, checking in when I feel up to it, but not pushing myself to post something new every day. It's time for me to take care of me for awhile.

Please keep the DeCoulaz family in your prayers. Michael was a GG community member and enjoyed keeping up with the Facebook posts. The world has lost yet another contagious smile and uplifting spirit, and I, for one of many, am deeply saddened about that.

Here's a video Michael did a couple of months ago ... it's his weight loss infomercial and clearly demonstrates his unusual wit. If you are easily offended when someone makes light of cancer, please do not watch. It's just Mike making light of his own, very serious, situation.