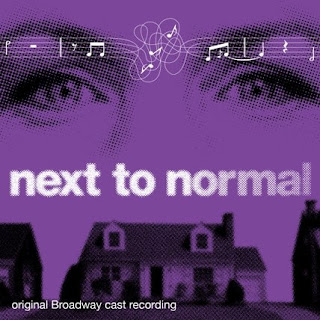 I'm reeling a bit from a show I experienced (I can't say saw) last night, which is why it is going on noon and I still haven't posted this.

When you were pregnant, did you think about what you would like your kids to inherit from you? Two of my girls got my blue eyes. All three got my long legs. Jess got my once-blonde hair. Unfortunately, that is not all she got.

Last night, she and I treated ourselves to a show at the Benedum in Pittsburgh. It was part of the Broadway Series and we had been looking forward to seeing it for quite some time. The show is called Next to Normal, brilliantly written by Brian Yorkey, who also wrote the lyrics (music by Tom Kitt), and winner of the 2010 Pulitizer Prize.

The orchestration, set design, lighting and directing were amazing. But they didn't even come close to the performance delivered by Pearl Sun, who was the understudy for the lead role of Diana. Brilliant, brilliant portrayal of a wife and mother tormented by mental illness. The show is raw in its emotion, as you watch a family deal with the path of destruction bipolar disorder can leave as, like a tornado, episodes strike out-of-the-blue, with little warning.

For Jess and me, tears started streaming down our cheeks halfway through the opening number. By the end of the 2 hours and 15 minutes, I had to wonder why I bothered putting on any makeup.

Why the tears? Because, in addition to passing on some my physical features to Jess, I also passed on my mental illness, and sometimes that nearly kills me as I have watched her suffer from the devastating effects of being bipolar.

Next to Normal brought back memories of years ago when my disease was undiagnosed and I was out of control. It brought back regret, something that people with manic depression learn to live with. It aroused in me concern for my daughter, who fears what may be ahead for her. And it made me think about the sweet lovely little Lady Laura, my 2 1/2 year old granddaughter, who is next in line to inherit this insidious disorder.

Nevertheless, with all of that aside, I have to say that Next to Normal is my favorite stage production of all time. Never before have I seen anything that so accurately portrayed the raw emotions, fears, denials, pain and hopefulness that families dealing with this type of disease live through. The performances were spellbinding. The lyrics so brilliantly captured the thoughts and emotions from all sides of this disorder, that there is no way Brian Yorkey hasn't been touched in one way or another its vicious claws.

I have never felt the need to rise in ovation at the end of a show the way I felt last night. And if I could have, I would have given Ms Sun a thousand standing ovations. She was that good.

Was this a feel-good musical? By no stretch of the imagination. Would I see it again? In a heartbeat. And, despite the fact that Pearl Sun was standing in for Alice Ripley (who took home a Tony for her performance), I would want to see it with Ms Sun again. It is hard for me to imagine anyone delivering a more powerful and accurate performance.

Also worth noting were the performances by Curt Hansen (phenomenal), Asa Somers, Ema Hunton, Perry Sherman, and Jeremy Kushnier and the direction by Michael Greif. I highly recommend going to see this gem. Click here for their tour schedule. Unfortunately, there aren't many cities left on the tour, which finishes up in Toronto on July 31st.

So, what does all this have to do with my Sabbath Experiment? Well, for one thing, we went to see it on a Sunday. It was the only time I could work it into my schedule, even though I was tempted to forsake the Sabbath and the show and work on taxes instead. But there's something about The Sabbath Experiment that makes me feel accountable.

So, instead of heading into my office after church (and lunch out with the kids) yesterday, I headed for the bedroom instead. I decided to take this Sabbath rest seriously, and I crawled into bed for a lovely afternoon nap. And it's a good thing I did, considering the emotional wringer I was about to go through that night.

I also wanted to mention that I started teaching an adult Sunday School class series on Christianity and the Environment: Why Should We Care? I'm not sure if it was received well, but I'm hoping it will grow on the class as the series continues.

I've rambled long enough. Work and taxes are beckoning me. After all, it is Monday, and I have to wait another six days until I can excuse myself for some much-needed Sabbath rest.

Keeping it restful and real on the Sabbath,