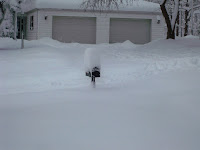 So what's the story with Global Warming?? As I look outside at the nearly three feet of snow in my yard, I can't help wondering what has brought about this return to winter. With projected temps below freezing for the rest of the month, it's hard to embrace the Al Gore-isms that permeate environmental websites and magazines.

Well, the flipside is we are now entering a season of Global Cooling, just like we experienced in the 1970s. Back then, the furor revolved around climatologists' claims that we were headed for an Ice Age. Of course, these claims only made them look like fools eventually, but many environmental enthusiasts jumped on the Global Cooling bandwagon perpetuating a mild hysteria. It really makes you wonder in light of the over-the-top hysteria that has resulted from the Global Warming camps.

Am I saying we should stop caring about pollution and environmental issues? Absolutely not! The best part about the Global Warming alert has been the wake-up call we've received. We all need to start caring about the environment...not because of Global Warming, but because we're killing our planet, our wildlife, our marine life and ourselves! Being green is about a whole lot more than Climate Change!

Speaking of which, the newest findings point to a projected 30 year Global Cooling pattern we have now entered. As a matter of fact, one of the U.N.'s top Global Warming proponents has changed his tune. Professor Mojib Latif, a professor at the Leibniz Institute at Germany's Kiel University and author of the U.N.'s Intergovernmental Panel on Climate Change (IPCC) report, predicts we are now in the early stages of a "mini ice age," based on the natural cycles in water temperatures in the oceans. He blames the rise in temperatures over the past three decades on the fluctuations in currents and now says we're going to spend the next three decades facing falling temperatures.

And the evidence is widespread. Did you know that Beijing had its heaviest snowfall in sixty years and Europe's recent snowstorms shut down the Eurostar train service, as well as the airports? Of course, there are some environmental enthusiasts blaming these arctic conditions on the rise in greenhouse gases, thus Global Warming, but we can't expect them to let go of the propaganda that fuels a worldwide hysteria. Based on this past summer, which I often referred to as "the summer that never was," and the current conditions, I'm thinking the Global Warming alerts just might be losing their zing.

The good news is, this might be the end of the Global Warming blitz for awhile. The bad news -- winters like this one will become commonplace.

My advice: invest in snowblowers (I know, I know, they're not environmentally-friendly, but they are heart healthy), generators, and lots of candles. We're in for some chilly weather.

Keeping it green and longing to see some,