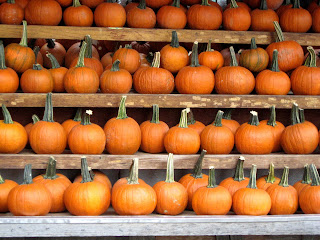 I'd start off by saying "Happy Halloween," but, quite honestly, it's not a 'holiday' I choose to celebrate. There are many reasons for this. I'd like to share with you the common sense ones.
For me, it makes no sense for parents to drum it into their kids' heads day after day, year after year, not to talk to strangers, but then on one particular night of the year they encourage them to knock on strangers' doors and take candy from them. Excuse me? Doesn't anyone else see the contradiction here?
Our little 'angels' are allowed to dress like little demons, or worse, like characters from R-rated movies they should know nothing about! Again, what sense does this make? Is it really cute to see an 8-year-old wielding a bloody ax? Really? Okay, I know not all costumes are fashioned after serial killers. "What's wrong with dressing up my little one like a Care Bear or Hello Kitty?" Absolutely nothing. Dressing up is fun for kids and I have no issues with that. My issues arise from introducing children to images of death and evil. To me, it's simply not acceptable.
Another objection I have to trick-or-treating is found in the name: 'trick or treat.' Again, we're encouraging our children to do something we would punish them for any other time of the year. We give them permission to threaten tricks on people if they don't get what they want. That's what the phrase "trick-or-treat" means, folks.
Halloween pranks seem to be an accepted practice for October 30th and 31st. Cars get egged, pumpkins smashed, windows broken, houses spray-painted, cats are tortured, yards toilet papered....woo hoo....Happy Halloween.
Then there's the money and time spent on decorating....sometimes, the yard decorations are cute, sometimes they're pretty. But more often than not, they are hideously ugly. Images of evil and death permeate neighborhoods. I remember the Halloween following my husband's death -- never before had I been so disturbed by front yard cemeteries and coffins used for decoration. I saw no humor in it, just painful reminders of my loss. Oddly enough, October of 2001 was void of similar yard displays. For one year people seemed to respect the mourning of a nation and didn't poke fun at tragedy as we were still reeling from 9/11.

One more word of caution to anyone taking their children out trick-or-treating -- a scenario for you to consider: A couple days after you've canvassed the neighborhood for Halloween candy with you child, he or she is walking home from school when a neighbor calls out, using his or her name (which he learned a couple of nights ago). He invites your child in for some leftover candy. "I'm not allowed to talk to strangers," your child protests. "Strangers?" he replies. "We're not strangers. Your parents brought you here on Halloween, remember? I gave you some chocolate and lollipops. C'mon, I have more candy set aside just for you. Your mom won't mind." What will your child do? You have unknowingly opened the door to a possible pedophile...and believe me, they do live in children's neighborhoods. They don't look creepy. They have nice homes and well-manicured yards, are members of the PTA, and are well-respected residents in the community. And they know how to lure your children in. Be aware.

I'm not suggesting you raise your children in fear. But using some common sense when it comes to Halloween can go a long way in keeping them safe. Don't throw your common sense out the window for the sake of 'tradition.' Things are different than when you were a kid. The world has changed. Maybe it's time for traditions to change as well.
Keeping it safe,
Hana
Posted by Green Grandma