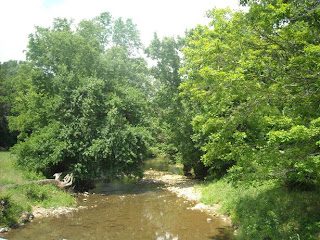 I find it interesting that people who are more conservative (or completely conservative) tend to shy away from environmental issues. Why is that? Is it for the same reason that many democrats hide their pro-life convictions from their friends? Why should either issue be a partisan issue?

While I find myself agreeing and disagreeing with all presidential candidates, I do tend to lean toward the conservative to moderate side of things. For example, I believe abortion is a bloodstain on our nation from which we may never recover from. I am not a Catholic, yet feel Pope John Paul II delivered one of the best quotes in opposition to abortion:

“A nation that kills its own children is a nation without hope.”

A few liberal democrats, like actress Kate Mulgrew, take stands against abortion, and I’m sure she faces opposition daily, as does Patricia Heaton, the Honorary Chair of Feminists for Life. These are just two brave ladies who choose to go against the flow.

I also believe that, in most cases, if you want a paycheck, you need to work. The Welfare program was set up to help people in transition, not to keep people dependent on the government. How did it get turned upside down the way it has?

And national health care…are you kidding me?

I believe in honoring life, working hard, giving humane treatment to animals and doing our best to care for the environment. I guess that means you can’t box me into a particular “wing.” I’m neither right wing nor left wing. What I am is an American with convictions. I don’t vote according to party…I vote according to issues. Of course, most politicians stick to their party’s stands on things, which makes voting particularly difficult since both parties support my causes on one side or another.

So, let’s get back to environmental issues. It’s my opinion that we live on a magnificent planet gifted to us from our Creator. How dare we disrespect it the way we have! I don’t believe in the radical means touted by the liberal political agenda, especially when I see such hypocrisy there. However, I also cringe at the apathy of the other side. C’mon folks, wake up! This is not a political issue. This is an issue for all of us. It’s time we all do our part to ensure a healthier environment for the next generations.

Keeping it honest and green,