The surprising benefits of hemp 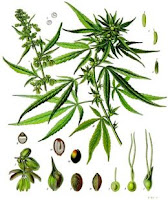 Do you know what happens when you smoke hemp? Not a whole lot. You may end up with a cough or a headache, but you certainly won’t end up with a high. Surprised? Most people are because they mistakenly think hemp is the same thing as marijuana. It’s not; even though they are both members of the plant species cannabis sativa and bear an uncanny resemblance. Actually, the psychoactive properties in marijuana come from the THC (tetrahydrocannabinol) found in the flower of the plant. While the THC values in marijuana are about 15% - 20%, they’re only standardized at about 0.3% in industrial hemp.

So what’s all the hype with hemp? It’s actually an eco-friendly renewable resource that is once again warranting attention in the United States (although it’s not legal to commercially grow here). Hemp is an excellent alternative to cotton when it comes to clothing, as hemp is more resilient and water-resistant, offers better breathe-ability, and is, quite simply, softer and warmer. With the look of linen and the feel of flannel, it’s no wonder clothing made of hemp is gaining in popularity.

But clothing isn’t the only thing hemp is used for. Consider these facts:
One of the most beneficial parts of the hemp plant comes from the seed which contains many nutrients for both human and animal consumption. The hemp seed consists of
It also is the absolute best vegetable source of essential fatty acids, with 55% Omega 3 linoleic acid and 25% Omega 6 linoleic acid, as well as gama linoleic acid.

Hemp seeds can be used in baking or cooking, crushed or whole. Hempseed oil is the principle product derived from the seed and has many uses from nutrition to cosmetics to paints and varnishes.

The multiple uses of the hemp plant, coupled with its eco-friendly properties, makes it the perfect crop choice for farmers across America. So why are we not seeing this invaluable plant being harvested from coast to coast?

Well, not to sound cynical, but you’d have to ask a politician about this. After all, it’s the powers-that-be that enforce the law that makes industrial hemp production in the U.S. illegal. But it wasn’t always this way.

Up until 1883, nearly 90% of all paper in this country was made with hemp rather than wood pulp. Four million pounds of hemp seed was sold in the States in 1937, and up until that year, almost 90% of all rope and twine was manufactured from the hemp plant. Then there’s the car Henry Ford built in 1941, made from a hemp and wheat straw plastic. However, the popularity of hemp and its abundance seemed to be cutting into the potential profits of men like William Randolph Hearst and Pierre DuPont, who collaborated and succeeded in making hemp an illegal crop in the U.S. in 1937. What did they have to gain? Well, Hearst held interests in multiple lumber mills and personally owned huge forests. DuPont used petroleum to manufacture synthetic fuels and fibers, such as rayon, nylon and a variety of plastics. The versatility of hemp wasn’t welcome in their world.

Seventy-plus years later, what have we learned? Well, we’ve experienced an energy crisis, polluted our air and waterways, found that chemicals in synthetics can be a danger to our health, endangered our wildlife species with the destruction of the forests, created holes in our ozone layer, etc., etc.

Could this have been avoided? Possibly. Researchers estimate the if just 6% of the continental United States would be planted with hemp crops, this would provide for ALL our national energy needs. Is this factual? I don’t know. But it certainly should be worth investigating. So why is our government sitting on its hands on this one? Is it that there are too many Hearsts and DuPonts out there blocking the way for real change?

I don’t know about you, but this makes me angry. When I think about the possibility that we could have fuel with far less toxic emissions, affordable clothing that wouldn’t be chemically treated, healthy alternative sources of essential fatty acids, etc. I just want to schedule a meeting with the higher ups and ask them why it isn’t happening. They talk the talk of independence from foreign oil, but when given a sensible alternative, they turn a deaf ear. Angry…you bet I am. And frustrated with the stupidity and ignorance of people who continue to think it should be illegal, because they refuse to differentiate between hemp and marijuana.

In no means is the Green Grandma endorsing the non-medicinal use of marijuana. But I'd grow some hemp on my rooftop balcony without hesitation.