AirAsia jokes and a viral video that has me fuming

I'm frustrated, which is not a good way to start the last week of 2014. But seriously, I need to vent.


First of all, there is the tragic disappearance of AirAsia Flight 8501. That greatly saddens me, but what frustrates/angers me is some of the responses I've seen on Facebook. People are actually making jokes about this. Jokes! I scrolled down the comments on the WTAE-TV news FB post about the tragedy and was astonished by the coldness of some people's hearts. There were children and babies aboard that flight. Innocent lives appear to have been lost. And people think it's funny? When the news site posted that they fear the plane is at the bottom of the sea, a Steeler fan actually wrote, "And the Bengals are at the bottom of the river!" Excuse me?

The second thing I need to vent about is car seat safety and how some people try to make this part of the "Mommy Wars" that include co-sleeping, breastfeeding, extended breastfeeding, cloth diapering, feeding schedules, etc. This infuriates me. The other things mentioned are a question of preference and personal choice. While there are proponents on both sides of each of these issues who strongly believe their way is the right or best way, car seat safety should not be lumped into this grouping. I don't understand how people don't get that.

Yesterday, I posted a video on FB that shows a young boy letting his mother know exactly how he feels about her pregnancy. The video has gone viral. I didn't post it to show the "cuteness" of the boy and his rant, but rather to point out the fact that both children in the video are not safe in their car seats. And, of course, I, along with those who agree with me, got pounded for being self-righteous and judgmental.

Let me ask you a question: When Michael Jackson hung his baby upside down over a balcony rail, were people being self-righteous and judgmental when they gasped and commented about how unsafe that baby was? 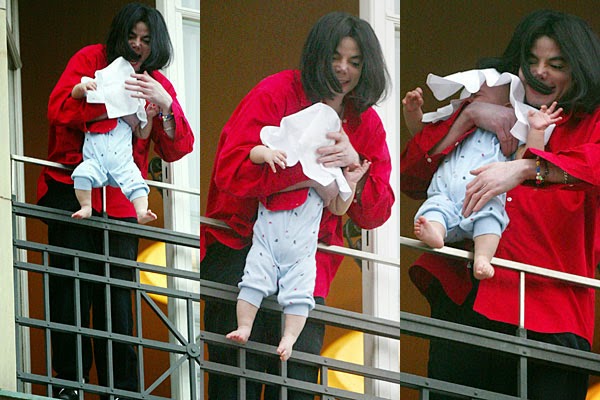 Child safety is an issue I take seriously. Which means I'm going to get upset when I see babies in car seats propped up on the top of shopping carts or children improperly restrained in vehicles. And you should, too.

These little ones have no say and cannot protect themselves from poor parenting choices.

In many cases, it's simply because the parents are misinformed. And that is exactly why I will continue to post things here and on social media to try to educate parents so they do not suffer the devastating loss of a child because no one wanted to interfere or sound self-righteous or judgmental. It's not about Mommy Wars; it's about common sense.

I often hear people say, "We didn't have car seats and we survived." Of course, you survived. The ones who didn't aren't around to tell you their side of the story. And, most likely, the reason you survived is because you weren't involved in an accident.

Let me tell you a secret: When my children were young (back in the 80s), I kept them in car seats until they were a year old. After that, I simply strapped them into the back seat with a lap belt. Sometimes, I double strapped them. I had a friend with three small children and we used to go places with all five little ones strapped together in the back seat. Thank God we were never in an accident!

After my granddaughter was born in 2008, I found a car seat at a garage sale and bought it for her. That's what she rode around in whenever she was in my car for a couple of years. I didn't know any better. I didn't know that she shouldn't have been front facing at one. I didn't know that used car seats can be dangerous (they could have been in an accident or be expired, thus compromising their effectiveness and safety). I simply didn't know any better and wish I had. Yes, she survived, because, like with my own children, we were never in an accident. But countless other children were not so lucky during those years. Countless other parents and grandparents will spend the rest of their lives regretting their mistakes.

So, do you really think it's being self-righteous and judgmental to comment on a video of a boy sitting in a booster seat in the car when he is clearly too young to be doing so?

"When a child is too small for a booster they risk 'submarining' under the seat belt, and suffering internal injuries to the belly and esophagus where the seat belt does not fit properly." ~ Megan Arce, Certified Child Passenger Safety Technician

Or a baby, not properly strapped into a front-facing car seat which should be rear-facing? It doesn't matter that the car's not moving. Even if the mother does finally attach the crotch strap before starting the car, there is still the issue of the little boy's safety. He should be in a five-point harness.

Call me self-righteous. Call me judgmental. But, please, don't infer that I'm taking part in the Mommy Wars. It's not a question of who's a better mommy. It's a question of safety.

As Megan Arce stated at the end of every post in our Car Seat Safety Series:


"When you know better, you do better."