Review It Wednesday -- You gotta believe 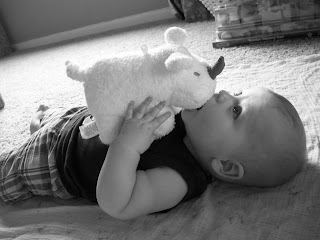 This is a tough one. Companies send me products to review, and generally, I love them. It's so easy to post a positive review of free stuff, you know? But what happens when you get stuff you're just not thrilled with? Uh oh. I have to be honest. You guys are counting on it, right? Well, the unpleasant task is at hand.

A couple of weeks ago, I received a package from Dandelion. When I opened it, I was thrilled. And for good reason. Inside the box were two of the most adorable stuffed rhinos I've ever seen! And I'll get to them in just a minute.

Also in the box were a few packages of kids' dinnerware ... made from corn. That caused a conflict with me right away. You see, I'm not a fan of using corn for much of anything other than eating and feeding livestock. The reason? Well, the more we produce corn for non-edible things, the less we produce corn as a food source. As a result, food prices start to rise and poor people have less to eat. So, I'm conflicted.

Is it good to have alternatives to plastic? Absolutely. But I'm not sure corn is the answer.

So, with that said, you already know I had a bias against the corn ware. My daughter, Bethany, brought up a good point, however.

"Well, at least this stuff isn't disposable. So, it's not so bad as the cups and straws made from corn that are thrown away."

So, I gave her the baby dish and spoon , gave some of the toddler forks and spoons to my other daughter, and I kept the two reusable divided plates for when the kids were here for dinner.

On Monday night, we used a plate, fork and spoon at dinner. We discovered something I didn't like. When hot food is added to the plate, it starts to bend. Same thing happened when the fork was put into hot food to hold it while it was being cut so it could cool down. The hot food 'deformed' the fork. Now we know why the instructions advise against putting this stuff in the dishwasher! 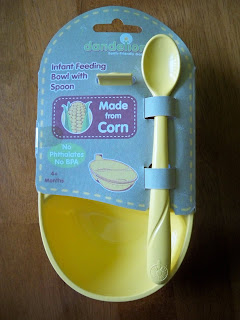 Then, I found out that when Bethany was washing the infant feeding spoon, it broke in half in her hands! It's not like she was being rough with it or anything. So, we found that that the corn-based products weren't very sturdy.

On the plus side, these plates and flatware are a lovely color of yellow and are nicely molded for little hands and mouths. Since they are made from corn, they are free from BPA, phthalates and PVC and are completely biodegradable. I like that about them. I also like that the manufacturing of them requires significantly less fossil resources and generates far fewer greenhouse gases than conventional plastic. The Dandelion Corn Tableware is an Award-winning earth-friendy product.

I also like the packaging. It's attractive and is made from 100% recycled materials. Dandlelion uses vegetable inks and encourages the recycling of the packaging when you were done with it. So, I'm not giving a total green thumbs down ... it's a mixed review when it comes to the corn ware.

And, there is no doubt in my mind that Dandelion truly cares about the health and safety of childen and the environment ... which leads us back to the rhinos. 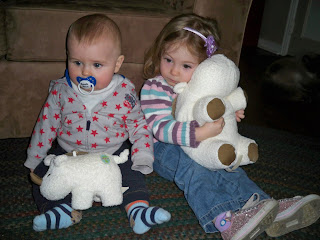 How cute are they? And the grandkids aren't too shabby, either! 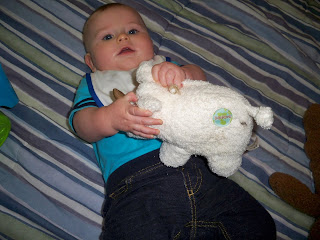 These two stuffed animals are among the cutest I've seen. They are made out of organic and natural materials, which prove to be healthier for little ones to play with. And they're squishy soft and super cuddly. The rhinos are part of the Believe line of toys, which include mommy and baby elephants and polar bears. 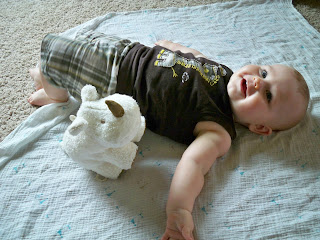 Here's what the Dandelion website has to say about the Believe Organic Plush toys:

They were "created to inspire families to think about their impact on the planet and precious animals around us. We believe we can all work to better our world and it's our responsibility to do so."

I love these stuffed toys! Knowing they're safe for my grandson to gnaw on and can be tossed in the wash after a day of rough play makes me especially happy. And they don't shed, which means no mouth or fistfuls of 'fur' to contend with. They really are the perfect plush toys for babies, toddlers and children of all ages.

The Believe Organic Plush rhinos get a green thumbs up -- way up! I really don't think I could like them any more than I do! But I'm not the only one who counts here! The lovely little Lady Laura loves her mommy rhino and, as you can tell by the pictures, the baby rhino is quickly becoming a favorite of little Lord Lincoln's! Move over Sophie ... a rhino's about to stampede on through!


Reviewing it for you,