The absurdity of Pull-ups 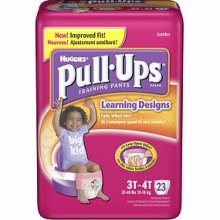 The Huggies Pull-ups commercial with the Pixar cars really irritates me. Have you seen it? The toddler pulls up to the bathroom in his toy car, runs in and comes back out as he finishes pulling up his glorified disposable diaper (that's all it is, you know). The commercial bothers me on a couple of levels.

Besides the idiocy of the product, I have an objection to sending a toddler off to go potty by himself period. Depending on the gender of the child and what he/she had to do on the potty, don't you wonder if he/she properly wiped himself/herself?? And then there is the hand washing issue. How well did those hands get washed anyway ... or did they at all? Off the kiddo zooms in his toy car ... germs and all. Yuck.

I mentioned Huggies Pull-Ups in one of my Facebook posts last week and got a mixed response. One community member asked, "What's the alternative?"

The question surprised me. For me, even considering using a disposable training pant like a Pull-Up is not an option. I personally think this was one of the stupidest products ever to hit the shelves. Why? For the following reasons:
"But my kid's almost three and I can't get her to go on the potty."

Of course not. Not if she's in comfortable disposables cleverly decorated with her favorite Disney characters! Why would she be??

Now, I'm not going to go into the various tricks of the trade involved in successful potty training. There are a myriad of resources available for that. What I will say is if you want to encourage your toddler to graduate from being a baby, you have to give them incentive -- babies wear diapers and big boys and girls wear big boy or big girl pants...not a restructured, more convenient version of a diaper.

Will it take some work on your part? Yes. If you didn't expect that, perhaps you missed the part about parenting being work ... a lot of work actually.

Will there be accidents? Of course. So, you clean them up.

The fact of the matter is, cloth-diapered babies tend to be much easier to train than those who are wearing disposables. Cloth diapers don't have chemicals that suck up the moisture (don't you ever wonder what those chemicals are doing to your children??). Because the child feels the wetness, he/she doesn't want that diaper on for long. It's that simple. And guess what? You can actually find some really nifty underwear for 2-year-olds -- complete with all sorts of their favorite characters!

Maybe I've ranted long enough. It's just that I saw that Huggies Pull-Ups commercial again and it got my blood boiling. And that was shortly after I saw that obnoxious I Poo in Blue commercial ... don't even get me started again on that one!

It's time for parents to start thinking about the health of their children (and the health of the environment), and stop looking for convenient so-called short cuts. Care about your kids, folks. Read the warnings about these chemicals. Think about the future of this earth you'll be leaving for your kids and grandkids.

Keeping it green and healthy for the kiddos,