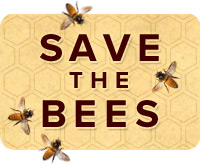 Have you heard about Colony Collapse Disorder? That's what scientists have dubbed the growing crisis as the U.S. honey bee population has continued to dwindle. As a matter of fact, some estimates are as high as a 30% decline per year since 2006. This is ugly, folks. Why?

Simply because bees play an important role in our food production. Without bees to pollinate our crops, the food supply will dwindle as well.

There are many theories as to why the bees are dying off. Some suggest it is because of cell phones and other wireless devices. However, there is increasing evidence that the reason is because of pesticides, particularly clothianidin, a chemical produced by Bayer CropScience in Germany. Oddly enough, this chemical is banned in Germany, joining France, Slovenia and Italy in the prohibition of its use.

Unfortunately, there has yet to be a major independent study as to the safety of this chemical. Even though the pesticide has been used on corn crops in the U.S. for the past eight years, it only received official approval from the EPA in 2010, based solely on a study conducted by, you guessed it, Bayer itself! Hmm. Is it possible that the Environmental Protection Agency is more concerned with protecting big corporations than the actual environment? Unthinkable!

The bottom line is that clothianidin is in the family of neonicotinoid pesticides that have been proven to be highly toxic to honey bees. If we're treating our crops with something that kills the bees, yet at the same time we're depending on the bees to do their work, there seems to be a conflict here. Plus, suppliers are selling seeds already treated with clothianidin.

What can we do? Well, once again, I am asking you to contact the EPA to tell them you are behind an immediate ban on the use of clothiandin until a full scientific review is completed that conclusively determines its impact on the population of these valuable insects. It's a simple online petition and it will take only a minute of your time. If we don't start being proactive in protecting the environment for future generations, we have become a sad, sad society.