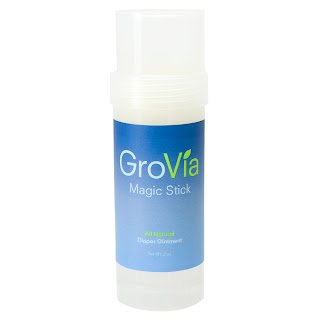 Here is the shlick on the Stick: It is an organic diaper rash product that goes on clear and smells simply divine. You can use it with disposable or cloth diapers.

With great hesitation, I bought GroVia’s Magic Stick. I didn’t really want to buy it because I have been using my left over Weleda diaper cream from my first baby. As an earth mom concerned with only putting natural ingredients on my baby’s bum, I have tried Burt’s Bees diaper cream and then Weleda. Both are natural zinc-based creams that are a tad messy, but smell great and work pretty darn good. I prefer the Weleda, because it just seems more soothing and it contains calendula flower extract in it, which is known for its healing and anti-inflammatory properties.

I have been cloth diapering my second baby for four months now. To use the left over Weleda cream, I’ve been using a disposable insert or bio-liner with my cloth diapers. But, my ‘problem’ is I am hooked on cloth diapering, and love not creating any extra paper waste.

So, being committed to cloth diapering, I surrendered and went into my local cloth diapering jaunt, The Green Nursery, where *gasp* they were sold out of their favorite cloth diaper-safe cream, the Magic Stick.

“It goes so fast,” the owner explained. “We can barely keep it in stock.”

Well, that really made me want to try it. Two weeks later, I managed to get my hands on one.

The Magic Stick is made by GroVia, a brand that I have come to love and trust. Not only are their cloth diapers well made, but the inserts are organic cotton. Their Magic Stick didn’t let me down. The ingredients are natural and organic. I like that it contains rosehip oil – a natural substance that contains trans-retinoic acids that helps regenerate damaged skin tissues. Rosehip oil also moisturizes and nourishes the skin and is said to be quite commonly seen in dermatologist and plastic surgeon offices.

The Magic Stick glides on clear, like those deodorant commercials. But what gets me the most is the smell. I am not sure what blend of essential oils they use, but every time I use it on my baby’s tush, I feel like (to be dramatic) we are sitting in the middle of a meadow in spring-time. Buh-bye pooey diaper, hello Magic Stick.

I broke out the Stick for the first time last weekend while traveling. My little girl broke out in a tiny rash, and so I tested it. Two hours later at the next diaper change, the rash was gone, and her bum seemed still moisturized.

It has only been a week since I started using it, but I keep looking for an excuse to use it because I just love that fragrance. Actually, my daughter’s bottom does get a little dried out from the homemade wipe solution I use, so I have been using the Stick to help moisturize. So far so good. No out of control rash. I can safely say, I know why the Stick is so hard to keep on the shop shelves!

You can follow Samantha's adventures raising two young children on her blog.


Disclaimer: GG does not necessarily subscribe to or agree with guest bloggers' viewpoints. But, as in all communities, believes differing opinions add color to the landscape.
Posted by Green Grandma