Yesterday was a rather strange Sabbath. First of all, it was Halloween, and by now you all know how I feel about that! Evil on a holy day. Hmm.
Secondly, I woke up with a sore throat and an asthma attack (a rather rare occurence of late). And, much to my husband's chagrin, I didn't have a rescue inhaler. I lost it awhile back, and since I haven't needed it, I never bothered to replace it. So I stuck close to home where my nebulizer was handy. Which means, I missed the worship service at my church. Too bad. I heard it was a powerful sermon and prayer time.
And prayer, is most definitely needed these days. I have a spirit of heaviness upon me lately, and yesterday was no exception. With all of the political crap going on (thank God the elections will be over tomorrow!) combined with what I view as Halloween crap, it is hard to stay focused on the positive.

And then there is all of the sickness and death of late. Little Gabriel, who never had the chance to breathe his first breath (you can read more about him tomorrow) and Dee Dee, the 45-year-old sister of a good friend of mine who lost her battle with cancer a few weeks ago.

Lois, a woman from our church who is my age, is battling bone cancer. If that isn't enough, she had a brain aneurysm and a heart attack a week ago. We are all waiting for her to open her eyes, believing along with her husband, three daughters and the rest of the family, it will happen.

My brother-in-law, Ron, was admitted to the hospital on Friday with blood clots in his legs and lungs. While scanning for the clots, the doctors found a rather large (4.6 cm) thoracic aneurysm. Serious stuff. Really serious stuff.

While I am mentioning brothers-in-law, I have to include my husband's other brother, Tom, who is fighting his own battle with cancer. And the oldest brother, Chuck, who is recovering from back surgery. 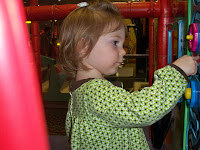 A heavy heart. That is what I had on the Sabbath. So heavy, I almost skipped my own Halloween tradition of going to Chuck E. Cheese with my daughters and grandchildren. Notice, I said almost. Two hours after they got there, I walked in and surprised them. Two-year-old Laura was too busy "counting" her tickets to care whether I was there or not, and two-month-old Lincoln was oblivious to the fact that I wasn't even there earlier! But Laura soon realized how much fun it was to have Grandma there and grabbed me by the hand, saying, "Up. Up," pulling me off to the land of electronic games and rides. She had a ball! There is nothing that will lift your spirits quicker than watching little ones delighting in life...and delighting she was!! I headed home two-and-a-half hours later, exhausted, but happy I had garnered the motivation to get there in the first place!
I spent the rest of the night on the couch in front of the television watching the Steelers lose, although, in light of the seriousness of issues facing so many people I know and love, it was just a football game...a bunch of overpaid men entertaining countless fans for an evening. My husband will have to deal with a handful of co-workers today who will be moaning and groaning about the loss, which will probably not be a smart move on their part, depending on his reaction. You see, it is all about perspective. And his perspective right now, like mine, is focused on much more serious losses and battles ahead. We are looking for some real wins here...

Sharing a glimpse into my Sabbath experience,