Another look at wind turbines 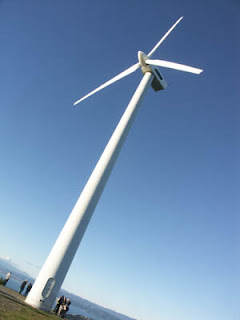 A woman from my church loaned us a children's picture book on wind turbines. Wind Story by MLS is an educational overview with a pro-turbine lean. But I have discovered that many people, some of which are environmental enthusiasts, are against wind farms.

One of the biggest concerns I hear and read about concerns the deaths of birds as they fly into the turbines. However, the fact is twice as many birds die by flying into cell phone towers...any chance we're ready to give up our cell phones for the sake of the environment? I'm doubting many people are ready to do that. Birds also die by flying into tall buildings and entire flocks are wiped out as they head into the paths of airplanes.

Am I anti-birds? Of course not! I have feeders and houses all over my yard and take great pleasure in watching the wide variety of species flitting around my property. I would sorely miss this simple joy if they were to vanish.

Wind energy, like all energy sources, has its benefits and its downside. At this point, wind energy is costly, but as it develops, the cost will even out and will be competitive with other energy sources. Eventually, it is estimated that it will become the most economically renewable energy technology. And if you look at the environmental cost of other sources of energy, you'll see that wind turbines are actually a cost-efficient solution.

Studies show that by supplying just 5 percent of the country's electricity with wind power by the beginning of the next decade, this would add a whopping $60 billion in capital investment in rural America. Plus, this will create approximately 80,000 new jobs and generate over one billion dollars in new income for farmers and rural landowners across the country.

Farmers will be able to lease out their land for turbines, with each turbine taking up less than a quarter of an acre and crops can be planted right up to the base of the turbines.

This clean energy option needs the support of green-minded people. Educate yourself and share what you know. If each of us gets involved in this endeavor, we might see some real changes in the next 10 years...changes that will have a positive impact on the lives of our children and grandchildren. This is an opportunity we simply can't blow off.