Unexpected Unicycles -- When the diagnosis is Down's

Today, I'm thrilled to feature guest blogger, Joy Givens. Joy and I met at a writers' conference a few years ago. While there, her husband showed up one evening with her precious baby boy. Here is her story:

Picture yourself, your family, and your friends together, all riding your bicycles along a sunny road. Then imagine that someone rolls up on a unicycle. How do you react? What do you say to them? 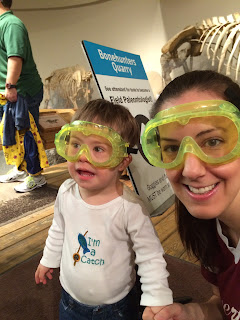 I have been the mother of an outstanding child named Joshua for about two and a half years now. There are tranquil nights when I kiss Josh’s sleeping face and thank God for the quiet, safe house that holds him, and there are days when I pull the dog’s toys out of Josh’s mouth and wipe Crayola marker off the walls. Parenthood is the most difficult, rewarding, exhausting, delightful, infuriating, fulfilling role I have ever received, and I think most parents would agree with that description.

Parenthood unites us, in ways we never anticipated—like when you see a mom firmly initiating a time-out in the middle of the dinosaur exhibit at the museum, or a frazzled new dad buying diapers at CVS at 10pm. You catch each other’s eye and offer a nod, a smile, some brief encouragement that says, “I’ve been there. Keep it up. You’re doing fine.”

But parenthood is also unique for each person who experiences it. No two children are exactly alike, and no two parents respond the same way to every situation (ask any two-parent family ever). This means that sometimes we don’t quite know what to say to each other. This is especially true, I have found, with parents of children with special needs. When we’ve only ridden bicycles, we don’t necessarily know how to talk about unicycles.
Let me tell you about my unicycle.

I was thrilled when I became pregnant in the late spring of 2012. My husband David and I had spent the past few years settling into a charming brick house, complete with a dog and a white picket fence, and the timing was just about perfect to start our family. We devised creative ways to announce the happy news. We thought of baby names. I didn’t throw up once. We found out that we were having a boy.

In our heads we were already riding bicycles.
And then one Friday morning in August, I got a call from my doctor’s office. My second trimester blood test had indicated an increased possibility of Down syndrome in the baby. I hung up the phone in tears. No expectant parent expects to hear that news.

The next two weeks were a fog of panic and powerlessness, until a second blood test confirmed that our son Joshua had three copies of his 21st chromosome—a diagnosis of Down syndrome. David and I had been excitedly preparing to ride our perfect, brand new parenting bicycle and found out halfway through the pregnancy that a unicycle was coming instead. What were we going to do?

Start learning to ride a unicycle.

It was slow going at first—we had no idea what we were doing! But as we began to learn about the unique possibilities that lay ahead with Josh, two truly beautiful things happened.

First, we learned to balance on that unexpected unicycle by being completely surrounded with support: our family, our friends, our church, our doctors, and our faith. It took more trust than I had ever thought I could give. But we found our balance. We decorated the nursery. We put up our Christmas tree. And we reclaimed the excitement of expecting a baby—our baby.

Joshua was born at 11:13am, at the same hospital where his daddy was born. He was the picture of health—a pink, squirming baby with dark hair and alert eyes. Joshua tried to put his feet down on my belly and stand up at the ripe old age of ten minutes. He was perfect.

In the years since, Josh has amazed us at every turn with his abilities, his curious and insightful mind, his kind spirit, and his sense of humor. He has learned to walk, to dance, to sing, to laugh, to finger paint, to give exceptionally fantastic hugs, and so much more. He’s “delayed” in some things and “advanced” in others, according to the averages parents hear about. Averages stopped mattering a long time ago, though. He’s perfect to us, and (spoiler alert) he always will be.

So here’s what I want you to know about unicycles.

Most parents ride bicycles. And that’s great. Bicycles are awesome. But there’s nothing wrong with unicycles—quite the opposite. A unicycle teaches you to seek greater balance and to be more aware of your surroundings. A bicycle might get you somewhere faster, but you can do tricks on a unicycle that you could never do on a bike, things you might never even think of trying. Having one wheel instead of two is not a loss. It’s a uniqueness that encourages diversity, appreciation, and even innovation.
So if you’re ever pedaling along my metaphorical sunny road and you see a parent on a “unicycle,” you don’t need to say any variant of the following:

“What happened to your bicycle?”

“Wow, you must be a super-cycler to balance on that thing!”

“Do you think you’ll ever be able to go faster, though?”

“It’s so great how you’re making it work with only one wheel.”

I wouldn’t trade my incredible unicycle for all the bicycles in the world. 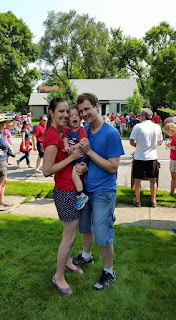 Having a child with Down syndrome does not mean that I’ve missed out on a journey. It means that I’ve learned to look at the path from a different perspective, and to keep better in mind that every other person’s perspective is different from mine, but no less valid. After all, we might each be travelling at our own speeds and in our own ways, but we’re going in the same direction.

It also means that I’ve been continually reminded that the journey, not the destination, is what really matters.


So if you happen to see me firmly initiating a time-out for Joshua next to the T-Rex exhibit, or sleepily purchasing diapers at ten o’clock at night, or wiping Crayola marker off a wall, feel free to say, “I’ve been there. Keep it up. You’re doing fine.”

Don’t hold back out of concern over how many wheels or chromosomes we’ve got. Parenthood unites us. You and I, your child and my child, we all want the same things: to be loved and accepted, to learn and grow, and to feel safe. So let’s enjoy the ride together.

Joy Givens is the author of the young adult novel UGLY STICK and the short story collection APRIL'S ROOTS, both available through Amazon, Barnes & Noble, and other online retailers. Joy resides in Pittsburgh, Pennsylvania, with her fantastic husband David, their remarkable son Joshua, and their impossibly lovable dog Riley. When she's not writing, Joy can be found tutoring high school students, singing and listening to all kinds of music, and spending time with good friends, good books, and good coffee. www.joygivens.com