A few weeks ago, a representative from Hallmark contacted me and asked me if I would like to take part in a promotion of a couple of their new Christmas products. She thought maybe my grandchildren would enjoy them.

Would I be interested? Of course! This was Hallmark after all. And I happen to love Hallmark. As much of a fan of Hallmark as I am, my husband is an even bigger fan. If the card doesn't say Hallmark on the back, he simply won't buy it. And ask him what his favorite network is. Without hesitation, he'll say Hallmark. If anyone wants to laugh at him for enjoying schmaltzy, romantic movies, go right ahead. They make him happy.

But that's not the reason for this post on Review It Wednesday. I'm here to review the Hallmark products I received.

I opened the box and pulled out a few of the promotional cards. Then I found some other goodies, like a box of 40 Christmas cards. I was able to give my 4-year-old granddaughter one of the Christmas Countdown cards, as well as the recordable "What I want for Christmas" card.

Anyway, Laura so enjoyed receiving the cards. And I'm certain Lincoln will love his Mickey Mouse themed Christmas Countdown card I will give him this weekend. 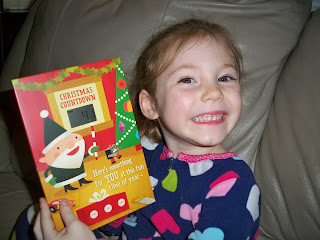 Laura's card featured a whimsical little Santa instead of Mickey Mouse, and as you can see, she was delighted. The card has a dandy little countdown clock that you can set according to the hour and day when you receive the card. Then the kiddos can place the card beside their beds or some other handy place so they can watch the days tick away. Imagine how excited they'll be when the display shows the number 1!!

Laura also enjoyed recording her Christmas wish list to Santa. She told him she wanted a robot. That was news to us. Good thing Santa will know. 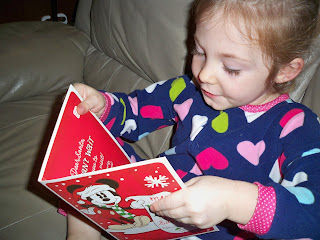 She quickly learned how to open the card and push down on the record button with her thumb. She waited until the beep and narrated her very short list (she's not a greedy child!). 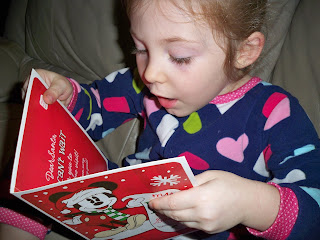 As you can see, she took this quite seriously! Since Lincoln's only 2, he won't be recording a list to Santa this year.

Both the kids will be able to enjoy the countdown cards, and I think they'll enjoy the fact that it's not just a countdown to presents under the tree, but it's also a countdown to time spent with the family. After all, they love being at Grandma and Pap Pap's house. For grandkids who live farther away, these cards are a perfect visual, digital reminder of how many days until you'll be together again.

As with all Hallmark cards and products, you can count on quality.

And guess what? In addition to sending me this wonderful assortment of cards, Hallmark wants to send a different assortment to one of you! Simply enter the contest via the Rafflecopter below.

This contest will run through the 19th and a winner will be announced on Tuesday, November 20th. The winner will have 72 hours to email me with their contact information so Hallmark will have the chance to get their prize in the mail in plenty of time for the holiday season. This contest is open to residents of the U.S. only.

Good luck! And as Mickey says at the end of the Christmas eve show:

Thank you for spending Christmas Eve at the House of Mouse. Here's wishing everybody a Merry Christmas and a safe trip ho-home!