Why did God create stink bugs? 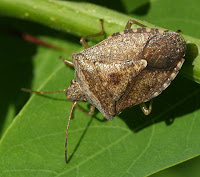 Did you ever wonder why God created stink bugs? Well, to be honest, neither did I until I started thinking of a title for this post. But it's a valid question. I wonder what their purpose is?

All I know is they are enough of a nuisance to cause a commotion in the infested communities across the U.S. Everybody is talking about them. After all, other than ladybug infestations, you rarely hear about someone trying to win the battle against a bug that multiplies by the hundreds in homes, particularly as the cool weather approaches.

While I have not been bitten, I have been sprayed. It is not a pleasant thing, folks. The sickening sweet smell lingers...for a long, long time. One day this past spring when I was putting my freshly line-dried sheets on the bed, I realized the stink bugs must have had a convention on the sheets as they hung on the line. It took days to rid the bedroom of that smell!

It was a really nice day in Western Pennsylvania yesterday so I decided to do my writing out on the back porch. What I did not count on was the onslaught of stink bugs flying and landing anywhere and everywhere...including in my hair! Yuck!!

There must be a solution! I said to myself. They will not win!

So, rather than googling stink bug solutions, I created an environmentally-friendly solution of my own. It is called The Stink Bug Eradicator, which is a much scarier name than product! The product is a simple solution anyone can make at home.
The odd thing was, once I had gathered upwards of 100 stink bugs in the jar, other bugs started jumping in as well. I even had a bee and a huge mosquito go into the jar as I held it under them. Hmm. Maybe I am on to something here. Can't wait to see how many I can bag today!

It may be labor intensive, but I have to admit, I found it to be a bit of a game. You could even have family or neighborhood competitions. See who can jar up the most stink bugs in an hour. Maybe it will become a nationwide phenomenon! Just remember, when that happens, you heard about first here on the GG blog.

Keeping it green when it comes to stink bugs,