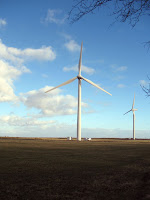 So what makes this small community worthy of mentioning? According to a July 16, 2008 ScienceDaily article, it's all about the farming. What are they farming? The wind.

As of the date the article was published in ScienceDaily, there were 24 wind turbines in Atchison County, 24 in Nodaway County and 27 in Gentry County. Rock Port boasts four of these and by them powers the entire town with electricity. The excess electricity is purchased by the Missouri Joint Municipal Utilities (approximately 3 million kilowatt hours/year). I don't know about you, but I think that's awesome!

The U.S. Dept. of Energy published a map indicating that this section of the state boasts the highest concentration of wind resources in Missouri. A variety of locations have the potential for utility-scale wind development success.

In addition to the tax revenue garnered by the wind farms, tourism adds an economic boast to the area as well.

Utilizing the wind to create energy. Common sense at work. That makes me happy and is the reason Rock Port, Missouri shares this month's Greeny Award with yesterday's guest blogger, Danielle Gregory.