The scary truth about formula

WARNING:  those of you who have opted to feed your baby's formula are not going to like this post.

However, if you're pregnant and 'on the fence' on whether or not to breast feed or formula-feed your infant, this is a must read. 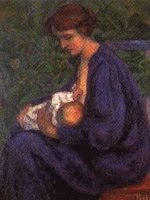 The CDC (Centers for Disease Control and Prevention) has released some disturbing findings after testing various brands of powdered formula. Fifteen unidentified brands were found to have been contaminated with perchlorate -- a rocket fuel component.

These findings were published in the March 2009 edition of the Journal of Exposure Science and Environmental Epidemiology. Their studies also revealed that perchlorate is "a potent thyroid toxin that may interfere with fetal and infant brain development." Oh, wait a second, while I heat up a bottle for my grandbaby....

Used in the defense and pyrotehnics industries, perchlorates have been used by the military since the beginning of the 20th century. They are actually salts derived from perchloric acid and are a component of solid rocket fuel. Yummy.

When ingested, perchlorate blocks the thyroid gland from taking up iodine, which translates into poor energy regulation. Iodine deficiency can lead to lesser amounts of thyroid hormone in your blood, ultimately resulting in hypothyroidism.

The FDA is aware of this danger, and rather than banning the use of perchlorate, it simply requires formula to be supplemented with iodine to make up for this deficiency. However, thyroid damage in infants continues to occur due to the iodine deficiency that is a direct result of being fed perchlorate-laced formula.

Aside from not boasting the same nutritional advantages as breast milk (i.e. at least 400 nutrients in breast milk not found in formula), infant formula is simply not a safe option. As I mentioned before in an earlier post, the liquid formula generally is contaminated with BPA which leaches from the plastic lining of the can. And now I'm telling you to stay away from the powdered formula as well. What's a mother to do?

Well, first of all, don't turn to Soy! According to countless studies, soy formula, without a doubt, will do harm your child, sometimes serious harm. This is one of the worst things you can feed your baby due to the high concentrations of manganese in soybean-based formula, which can lead not only to behavior problems in adolescents, but in brain damage in babies as well. There can be as much as 200 times more manganese in formula than in breast milk, thus it is a real danger to the immature metabolic system of infants under six months of age.

Additionally, a baby drinking soy formula on a regular basis is ingesting the equivalent of five birth control pills' worth of estrogen daily! The isoflavone levels of these infants were up to 22,000 times higher than of infants who were breastfed or fed non-soy formula.

Just a spoonful of sugar

Most logical parents wouldn't dream of giving their babies soda...although I have occasionally watched in horror as mommas have poured some of their sugared, or worse yet, diet sodas into their baby's bottles when at a restaurant, park or mall. Oh how my tongue has throbbed as I bit it repeatedly!

Most infant formulas are packed with high fructose corn syrup -- as much as, and sometimes more than a can of soda. Seriously.

So we're back to the question:

What's a mother to do?

Let's face it, there are cases in which a mother cannot breast feed, although I believe many of these mothers don't give it a fair shot. I've heard the excuses: "I wasn't producing enough milk." Nonsense. God created mothers to nurse their young. All mothers have enough milk -- sometimes you just have to give it time. As the baby nurses, more milk is produced. Basis biology.

I've also heard complaints of how much it hurts. Well, to be honest, it does hurt a bit in the beginning. But it's nothing compared to labor...or getting stitches after an episiodomy! Besides, most of the time, the pain arises from improper positioning of the baby. A trained lactation consultant can help resolve this issue. Besides, as all mothers know, trying to do what's best for our children involves pain....for many, many years!

But there are still cases, however rare, where a mother cannot nurse her baby...not to mention all of your wonderful adoptive and foster mothers out there. What are your options?

The safest option is to make your own infant formula. Time consuming? You bet. Better for your baby? Unquestionably.


There are many recipes for homemade formula on the Internet. Google it and see what you come up with. You can also discuss this with your doctor (unless your pediatrician is anti-homopathic solutions). If anyone has a tried and true recipe and would like to post it in the comments, I'll be sure to make it available to my readers.

As life gets more and more convenient, it also gets more and more hazardous to our health. Maybe our ancestors were luckier than they knew and maybe it's time for us to get back to the basics. Old-fashioned ways. Twenty-first century common sense. As long as you keep coming back for more, that's what the Green Grandma is going to deliver.