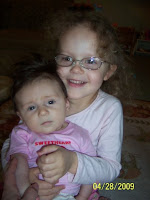 I'm posting earlier than usual tonight because I want to give some extra time and attention to my guest blogger, Heather Desuta. Heather is a SAHM with a 4 1/2 year old and a baby. She runs a graphic design business from her home while caring for her little ones.

Thanks Heather...not only for giving us some excellent fodder tonight, but for gracing my page with this picture of your children and again, for designing my logo. I love it!

Hi there! The Green Grandma asked me to guest blog for her tonight and was kind enough to let me choose my own topic. Here it is: slippery slopes.

Earlier this year, I bought a hybrid. Up until that point, I guess I considered myself an environmentalist. I cared about the environment, but all I really did was recycle. I usually chose recycled and green products. When appliances needed to be replaced, I bought energy star. And my house was partly lit by those long-life light bulbs whose name escapes me at the moment.

But back to the purchase that sent me down the slope… my hybrid.

For a long time, I had been wanting the increased size of an SUV but was dreading the decreased gas mileage. While doing online research, I stumbled across something I didn’t even know existed… the hybrid sport utility vehicle.

I am not a car person at all, so I can’t comment on the hybrid SUV market, but I can tell you that I love my 2006 Toyota Highlander Hybrid (and its remarkable 27-28 MPG!!) I was also loving the statement that it made… look at me, I care about the earth! Then I started to really think about it. I had made a big, conspicuous purchase signaling my concern for the environment, but other than my moderate recycling efforts, what else was I really doing? My second daughter was four months old, and I was throwing tons of diapers away every week. Hardly a great example of environmentalism!

Right around this time, I was helping my sister register for baby gifts. Registry gun in hand, I mock swiped a package of “gDiapers”—a product that has an outer diaper cover with a flushable/compostable liner. We laughed about it and scanned packages of traditional disposable diapers instead. Then, making a second trip around the store to make sure her registry was complete, I went back to the gDiapers and read the box. And something inside me said “YES!” Maybe I could try these!

I saw that a size small gDiaper starter kit (2 reusable covers and 13 inserts) cost $27 and a 40 count of refill liners cost $15. Being mathematically challenged, it took a minute before the voice inside me said “nevermind!” Not with my daughter using 8 diapers a day.

During my drive home that day, something crazy happened. I began to think “well, what about cloth?” For years, I’d been hearing my friend Hana (a.k.a. “Green Grandma”) talk about the benefits of cloth diapering. I listened, all the while thinking no way, not me, not ever. I’d used disposable diapers with my first child and never once entertained thoughts of switching to cloth. But after searching the blogverse about cloth diapers, I decided to give cloth a chance. I chose a brand called BumGenius. Turns out, you don’t have to fold big sheets of cloth, origami-style, and pin them strategically onto your baby. If you’re willing to spend some money to get the extra convenience, there are cloth diapers called “all-in-ones” (AIOs) that basically perform the same as a traditional disposable diaper. They have a waterproof outer layer, cloth filler to absorb, a soft layer for up against the baby’s body, and Velcro tabs.

I bought 10 used AIOs on craigslist. (They were in great shape, but I also stripped the diapers and washed them twice before letting them near Elena!) And you know, it wasn’t that bad! I was laundering the diapers every other day, and it was surprisingly not awful! I bought a dozen new cloth diapers and went from cloth diapering on a part time basis to using cloth only. My back was sore from all the patting I was doing, especially when I’d look at my empty, unused diaper genie. Then, Elena switched from being solely breastfed to breast plus rice cereal, fruits, etc. Cloth diapering became a little awful but not horribly so. I was using cloth exclusively for a while, but now I’m back to part time. It’s not the mess of the diapers that I find challenging, it’s staying on top of the laundry. It’s a work in progress, and in writing this blog entry, I’m feeling a renewed enthusiasm for the subject. Maybe I’ll set a goal of using only cloth next week. Even if I don’t meet that goal, at least there will be fewer diapers in landfills because of me.

So, I went from being your average recycler, to a hybrid owner, then a cloth diaperer! Green opportunities are all around us! When our water softener needed to be replaced last month, we bought a non-electric system that also uses less salt than traditional softeners. [Kinetico Mach 2100s / kinetico.com] When you start purposely seeking out environmentally friendly products, you may be surprised where you can go green. But beware--the slope is slippery! You don’t have to be perfectly green. Just be greener! Come slide with us!
Posted by Green Grandma