Cat litter review -- it's a stinky job, but someone has to do it 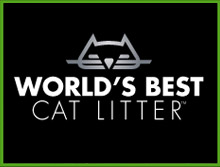 When I received an email asking me to review World's Best Cat Litter™, my immediate response was, "Yes, yes, yes!" After all, I'd recently learned about all the horrific health problems associated with clay cat litter ... health problems that led to the death of some of my kitties. To think those conditions may have been caused by the litter we were using appalled, disturbed, angered and depressed me. Seriously. Not to mention the environmental impact strip-mining 1.5 million tons of clay every year was having. And the assumption that clumping clay litter never biodegrades in the landfill. Ouch.

So, without hesitation, we made the switch to better alternatives. We tried a few different ones and simply were not happy with them. I don't recall the names of the first couple, but we did eventually try Swheat Scoop. While it was an effective litter, I did not appreciate the little specks of wheaty litter scattered throughout my house. Yuck. 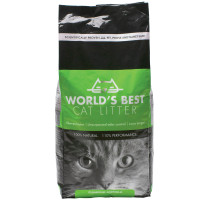 I was desperate to find a solution when, out of the blue, I got the email. I'd never heard of World's Best Cat Litter™ and thought it was a rather presumptuous name. After reading about it, I must admit, I hesitated. Why? Because it is made from corn and I have a problem with using corn for things other than food. It seems we are depleting the food supply in our global effort to be green, and that is counterproductive.

I expressed my concern in a return email. Here is the response I got:

"We chose whole-kernel corn as the source of World's Best Cat Litter™ for a number of reasons. Whole-kernel corn is all-natural and highly absorbent, so it provides superior odor control and instant clumping for easy clean-up. Unlike clay litters, it is biodegradable, renewable, and sustainable.

Our family of companies manufactures many products from corn that include food ingredients for human consumption, pharmaceutical products, animal feeds, and our cat litter, among others. The amount of corn used in the manufacture of World's Best Cat Litter™ is insignificant compared to global production and does not contribute to higher food prices or to food shortages.

For over 50 years, corn has been used in the paper industry, for adhesives, corrugated products, etc. When we make products from corn, it is not a choice of whether to feed people or not; we are providing products that enhance our everyday lives, and support the American farmers and the overall economy. Other examples of corn-based products used everyday include: batteries, candles, cosmetics, automobile cylinder heads, and shoe polish. We are proud to manufacture a product that is safe for humans, animals, and the environment -- made from a renewable resource that is biodegradable."

Fair enough. Besides, I wasn't finding a good solution for my cat litter problem that was healthy for the cats and the environment. So I decided to give it a try ... or should I say my husband gave it a try. After all, being the gentleman that he is, he doesn't want me touching the litter boxes, and I'm not going to argue with him, being the submissive wife that I am.

Anyway, he cleaned out the 2 of the 3 boxes and emptied them of the remaining Swheat Scoop. Then he refilled them with World's Best Cat Litter™.

His first reaction? There was no dust. Hallelujah for that! After years of breathing in the toxic dust from clay litter, a dust-free alternative moved up quickly on the approval rating. He was surprised by the appearance of the litter, expecting it to look more like, well ... corn. It doesn't. It looks a lot like clay litter.

Next test was whether or not our three kitties would use it. They now had choices. Two boxes with the corn-based litter and one with the wheat-based litter. Guess what? Apparently, all three of them chose the corn.

What does that mean for us? No more litter debris trampled through the house, onto the bed, in the rugs, etc. None. There seems to be no tracking with World's Best Cat Litter™.  Higher up on the approval rating.

What about clumpability (cool new word, don't you think?)? Excellent.

Odor control? Excellent. To quote Bill, "It seems even better than the others, if that's possible."

"You mean, as far as odor absorption?"

"Yeah, that's it. It seems to absorb the odors."

What is it about the clay litters I don't like, other than the environmental issues? Well, for one thing, the sodium bentonite particles in the litter dust (strewn into the air every time you pour the litter or your kitty scratches in it) contains silicon -- a known carcinogen!! That should be enough of a reason right there! But that's not all. Clay litter has been linked to respiratory problems, intestinal blockages, and a menagerie of other potential conditions.

Admittedly, I have not tried the recycled paper option, although I do like that idea.

For now, we are happy with World's Best Cat Litter™ and intend to keep using it. Here are some facts about this litter:

The downside? It's a bit pricey. But so are vet bills and if you're concerned about the health of your cats, it's worth it. These guys are: 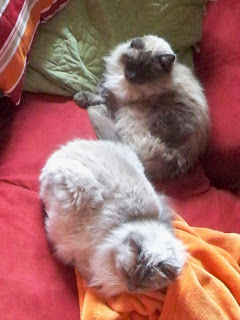 On a side note -- if you decide to switch from clay litter (please do) and you're thinking about trying Fresh Step Crystals, I urge you to reconsider! This silica-based litter is reported to be tied to lung cancer, bronchitis and a form of tuberculosis that can be fatal for your kitty.


If you're not convinced about World's Best Cat Litter™, I suggest you head over to the website, find a retailer close to you (Target, Petco and PetSmart all carry it) and pick up a 7 lb. bag. Give it a try and decide for yourself. You just might realize you've discovered the world's best cat litter!
Keeping it green in the litterbox,
Hana
Posted by Green Grandma