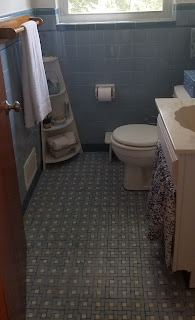 On May 12th, my husband went into the hospital for outpatient inguinal hernia surgery. As I said yesterday, this was the good ol' fashioned cut-him-open type. The surgeon found a congenital hernia larger than expected. Subsequently, my husband bled more than expected. They finished, closed him up, and 3 hours later, sent him on his way with instructions to have someone (me) with him for the next 24 to 48 hours. They didn't issue any warnings about dehydration or being light-headed. They didn't tell me not to leave his side. As it was, he was feeling good by the time we got home. We had lunch and then, since it had been an early day, I went upstairs to take a quick nap after he settled onto the couch to watch some TV. A couple of hours later (my nap took longer than planned), I awoke to hear a horrible crash. I jumped up and ran to the top of the stairs, yelling his name. No answer. I bolted down the steps and turned left. That's when I discovered my husband sprawled across the ceramic bathroom floor. His eyes were wide-open and he was completely unresponsive. I screamed his name over and over and then ran for the phone. The voice on the other end of the 911 call let me know they were experiencing higher than normal call volume. No! No, no no! I continued to try to rouse my husband to no avail. Let's face it. At this point I thought... no, I knew, he was dead. After about 3 minutes or so, the operator came on the phone and said, "911. What is your emergency?"

At the same time, my husband did something... I don't remember what it was exactly... that let me know he was still alive. I was almost incoherent as I practically yelled into the receiver, "My husband's had a massive stroke." After all, if he wasn't dead, a stroke was the only answer. His eyes were still wide open and he still wasn't moving. Those moments were right up there with the worst moments of my life. The absolute worse. The PTSD over my first husband's death in 1989 washed over me and I was hysterical. The 911 operator kept trying to calm me down so she could understand what I was saying.

Finally, my husband started to come to. He asked me who I was talking to and wondered why I would call 911. He did not want an ambulance. Too bad. It was on its way.

By the time the EMTs arrived, my husband was sitting up. They helped him to his feet and walked him to a dining room chair where he sat and answered questions. Despite his resistance, we were able to talk him into heading back to the hospital, where he stayed for two nights. Of course, my thoughts were that if they'd admitted him to begin with, none of this would have happened, right? Tests revealed he was not only anemic from the loss of blood, but he was also dehydrated. Dehydrated! Again, my thoughts were that they never should have sent him home without hydrating him after surgery. He is in his 70s and has a heart condition. Plus he was suffering from post-Covid. He should have been admitted for observation following the surgery. Thank you, insurance companies.

Naturally, when he collapsed, he did damage to the surgical site. While the bleeding didn't start right away, it did start a couple of weeks later and lasted 7 weeks! That's right. We dealt with 7 weeks of dressing changes, trips to the ER, another overnight hospital stay, and multiple visits with the surgeon. A CT scan revealed that the bleeding was deeper than they thought.

In the midst of this, his PMR (polymyalgia rheumatica), brought on by Covid-19 in February, continued to worsen. No one had answers for us. By the time we saw the rheumatologist in June, my husband had lost the ability to care for himself and I became a full-time caregiver. I went from running a team of caregivers for Dignity Home Care Professionals to being a care provider. And let me tell you, I do a much better job of being the boss than actually doing the dirty work. At times, my husband was so bad, he couldn't even feed himself. His dignity was gone. My hope was gone. We both were served a major dose of depression.

One day, I remember looking at his frail body (he'd lost a lot of weight and his muscle tone was nearly gone) as he sat in the recliner, his too-large sweatshirt crooked on his shoulders, and I thought, "When did my husband turn into a 90-year-old man?" I wept with the realization that my marriage, as I'd known it, was over. It was despair as I'd never experienced... the darkest of times.

Fast forward to today. Light came again, first from a doctor who had a diagnosis and treatment plan. Then from the eventual healing of the surgical wound. I have my husband back again.

Thirty years ago, the two of us eloped. We were blending families and found it easier to just skip a wedding and go off and get married. But after all we'd been this year, we decided to go ahead and have that wedding this month, surrounded by friends and family. The plans were in action, the invitations sent. And then the Delta variant started taking over and infecting so.many.people -- vaccinated and unvaccinated. So, realizing it would be selfish on our part to gather a bunch of people together to celebrate with us, we canceled the wedding. Another blow. Another reason for tears.

On August 18th, the two of us will celebrate the miracle of thirty years together anyway. And that weekend, our kids and grandkids will join us for a small garden party to celebrate as a family.

And Green Grandma is committed to not using any disposables for the party. As you can see, some things never change.

Thank you for reading and caring. Tomorrow, I'll share some lessons we've gleaned from this dark, dark time in our lives. Lessons about where to find the light.

P.S. The photo above is of the place my husband collapsed. Two things saved him from breaking his nose, losing some teeth, and/or having a serious head injury. One, based on the HUGE bruise that developed on his side, he obviously hit the doorknob of the bathroom door on his way down, slowing the momentum. It took us a few days to figure that one out. And two, see that rounded shelf in the corner? He must have hit the bottom shelf with his face before it hit the floor. The bruises on the left side of his face confirmed that. Placement of furniture is everything, right? Well, maybe not, but I sure am thankful for that little white shelf!