Did you know that February is Pet Dental Health Month? And did you know that periodontal disease is the most commonly diagnosed problem in cats and dogs? Bad teeth can lead to a host of other problems throughout your pet's body, so make sure you're taking care of your dog's and cat's pearly whites.
We didn't keep up with brushing our dog's teeth and we suffered through some pretty nasty odors as he breathed on us from day to day. By the time we took him to the vet, it was too late to save the majority of his teeth. Poor pup. He ended up having the majority of his teeth pulled and we ended up a bit poorer for it. If only we'd kept up with the brushing!
February is also Black History Month. So I thought it would be a good time to recognize 4 of the top African American environmentalists who are working to 'green up' their corners of the world.
There's Majora Carter who initiated green-collar job training and placement systems and founded Sustainable South Bronx, one of the most "environmentally and economically challenged" parts of the United States.
Van Jones is the author of The Green-Collar Economy and is an award-winning pioneer in clean-energy economy. Jones is the co-founder of three successful non-profit organizations, including Green for All.
And then there's Gloria. Just Gloria. No last name. Gloria runs a website called, Black into Green where she shares news and tips related to green living from an African American perspective.
For 22 years, environmental activist, Dr. John Francis, traveled across the country, mostly on foot, as an affirmation of his responsibility to the earth. He also took a vow of silence that lasted for 17 years!
Lastly, February is Creative Romance Month and National Sweet Potato Month. And, since I'm feeling generous. I thought I'd throw a contest!


Post a non-sexual creative romance tip or a sweet potato recipe in the comments section here or on Facebook (bonus entries if you combine the two!). I'll choose a winner via Random.org and announce it here on the blog on Tuesday, February 28th. Winner will have to contact me via email to claim their prize within 3 days. 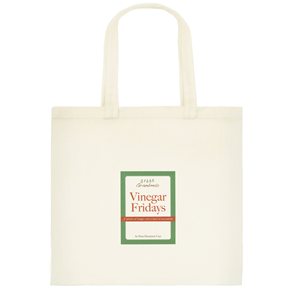 What could you win? How about a Vinegar Fridays reusable cloth bag and a signed copy of the book? Sound good? I can't wait to start reading (and trying out) your creative romance tips and sweet potato recipes!